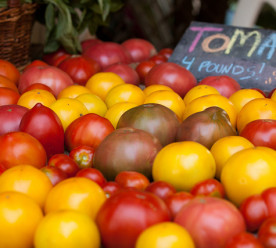 Your DJSI ranking is now public! Click here to find out how UK companies perform – with BAT, IHG, Royal Mail, GSK and Pearson leading the pack.

International food and drink firm Princes has unveiled a new set of measures to make its supply chain practices more sustainable. Launched under a new partnership with Italian agricultural group Coldiretti, the scheme will see Princes pay a premium to tomato farmers who use environmentally sustainable methods and have strong schemes in place to prevent worker mistreatment. Farmers will also be offered guaranteed three-year supply contracts and access to a ring-fenced grant scheme if they agree to work in line with Princes’ sustainability standards, including investing in agronomic technologies which reduce water and pesticide use. A new addition to the framework is a requirement for all Coldiretti farmers to use a blockchain platform which will enable Princes to monitor their practices more closely. Acting as a digital ledger, the blockchain platform creates a verifiable audit trail that can be used to trace products through the supply chain and track workers’ safety rights. In this way, Princes will be able to take action to improve any ‘hotspots’ for environmental or social breaches throughout its Italian supply chain. (Edie)

Institutional investors are calling on index providers to remove controversial weapons from global indices as part of a movement towards responsible investments. An open letter signed by 142 asset and wealth managers called on stock market indices to automatically exclude companies involved in the production of controversial weapons. Representing US$6.9 trillion in assets, the investors are asking for weapons including anti-personnel mines, cluster munitions, biological and chemical weapons and nuclear weapons to be removed. “There is a growing consensus among financial regulators, asset managers and end investors to invest responsibly. Excluding companies with any involvement in the production of controversial weapons is a key part of that,” the letter said. Colonial First State is one of the first Australian companies to join 142 institutional investors who are calling for the exclusion of controversial weapons. Other large names like Credit Suisse and Pictet Asset Management also signed the letter that was sent to FTSE Russell, Morningstar, MSCI, S&P Dow Jones and Stoxx. (Investor Daily)

Amazon on Thursday cancelled its plans to build an expansive corporate campus in New York City after facing an unexpectedly fierce backlash from lawmakers, progressive activists and union leaders, who contended that a tech giant did not deserve nearly $3 billion in government incentives. “A number of state and local politicians have made it clear that they oppose our presence and will not work with us to build the type of relationships that are required to go forward,” Amazon said in a statement. The decision was an abrupt turnabout by Amazon after a much-publicized search for a second headquarters, which had ended with its announcement in November that it would open two new sites — one in Queens, with more than 25,000 jobs, and another in Virginia. The agreement to lure Amazon to Long Island City, Queens, by Gov. Andrew M. Cuomo and Mayor Bill de Blasio, had stirred intense debate in New York about the use of public subsidies to entice wealthy companies, the rising cost of living in gentrifying neighbourhoods, and the city’s very identity. (New York Times)*

Ingka Group, the holding company which owns most IKEA stores worldwide, has snapped up a 25 percent stake in one of Germany’s biggest offshore wind farms, after the current owners agreed to sell 80 percent of their shares to a consortium of investors. IKEA said in a statement it paid more than €200 million for quarter stake in the Veja Mate offshore wind farm project, estimated to produce enough electricity to power 400,000 average German homes each year, saving more than 18 million tonnes of CO2 from entering the atmosphere over the project’s lifetime. “With this 25 percent stake, we make another step towards our 2020 target about renewable energy production exceeding our energy consumption,” said Krister Mattsson, head of Ingka Investments, in reference to IKEA’s green electricity goals. “It supports our sustainability targets, where renewable energy and energy independence play an important role. Investing in wind farms is part of our activities to support the financial strength of the company and contributes to our climate positive ambition.” (Business Green)*

A federal court in North Dakota has dismissed a lawsuit from natural gas transport company Energy Transfer Partners LP (ETP) against environmental group Greenpeace, according to a court order on Thursday. ETP had sued Greenpeace and other environmental groups in 2017, accusing them of racketeering and defamation with the aim of blocking the Dakota Access Pipeline, one of the most bitterly contested energy projects in years as environmental activists and Native American tribes tried to block the pipeline during a months-long standoff with authorities in 2016. In the lawsuit, ETP argued that the environmental groups’ actions and negative publicity against it, its sister company Energy Transfer Equity LP and other firms caused billions of dollars in damages. ETP said it was disappointed by the court order and said it intends to pursue its claims in the “appropriate venue,” without giving further details. Greenpeace in a statement hailed the dismissal of the lawsuit as a victory and said it sends a signal that “corporate overreach” will not be tolerated. (Reuters)