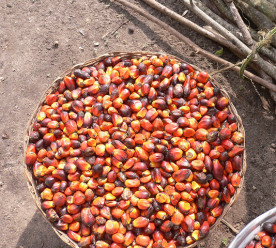 The European Commission has concluded that palm oil cultivation results in deforestation and its use in transport fuel should be phased out, but environmentalists criticized it on Monday for allowing a number of exceptions. Under the new EU law, the use of more harmful biofuels will be capped at 2019 levels until 2023 and reduced to zero by 2030. The Commission proposal, designed to become law after four weeks of feedback, said 45 percent of the extra land used for palm oil production since 2008 had previously been forested, compared with 8 percent for rival oil crop soybeans and 1 percent for sunflowers and rapeseed. However, it also said producers who could show they had intensified yields may be exempt. Such higher-yielding crops would be considered as less harmful if they, for example, are small holdings or entail cultivation of food or feed on “unused land”. Bas Eickhout, a Greens EU lawmaker who has been active on the file, said the exemptions were excessive and would allow large producers to wreak destruction. (Reuters)

UK energy giants signed up to the Inclusion Commitment to try harder to recruit more women, young people, and those from a black, Asian, and minority ethnic (BAME) background in its workforce. The initiative has been pioneered by the Energy & Utilities Skills Partnership, an industry-led group established in 2016 to address the sector’s workforce needs. The commitment was signed by a host of firms with sizeable clean technology and green infrastructure interests, such as Centrica, Veolia, National Grid, and ScottishPower. Some 83 percent of those working in the energy and utilities sector are male, compared to 47 percent for other sectors. Meanwhile, only five percent of the sector’s employees are from BAME backgrounds, compared to 11 percent nationally. Under the Commitment, firms have committed to five principles, which include working collaboratively, taking “targeted sector action” for diverse recruitment, measuring and reporting on progress at a company level, working to create an attractive company culture, and adopting more inclusive hiring practices. (Business Green)*

The gathering storm of human-caused threats to climate, nature and economy pose a danger of systemic collapse comparable to the 2008 financial crisis, according to a new report that calls for urgent and radical reform to protect political and social systems. Conducted by the Institute for Public Policy Research, the study says the combination of global warming, soil infertility, pollinator loss, chemical leaching and ocean acidification is creating a “new domain of risk”, which is hugely underestimated by policymakers even though it may pose the greatest threat in human history. The authors examine how the deterioration of natural infrastructure, such as a stable climate and fertile land, have a knock-on effect on health, wealth, inequality and migration, which in turn heightens the possibility of political tension and conflict. The paper stresses the human impacts go beyond climate change and are occurring at speeds unprecedented in recorded history. (Guardian)

Germany-based financial index provider Solactive AG will collaborate with Truvalue Labs, a San Francisco-based AI company, to intensify efforts to meet a significant increase in client demand for ESG indices. Truvalue Labs sources and analyses information differently than other ESG data firms through its use of AI and machine learning. The firm analyses unstructured data from more than 100,000 sources compiling an independent perspective on a company’s ESG performance instead of relying on company disclosures. The first series of indices under development utilise Solactive’s Global Benchmark Series as the starting universe. From this universe, Solactive selects companies with high data volume and high ‘Insight Scores’, Truvalue Labs’ proprietary ESG rating. of the strategy have shown outperformance in different markets. The index design allows clients to individually form regional or domestic index combinations, providing full flexibility in the creation of custom equity strategies. (Investment Europe)

New research by UK charity ShareAction shows FTSE 100 pension schemes in the UK leave staff savings highly exposed to climate risks. The research identifies a disconnect between what big companies have committed to doing on climate change and the protections given to their employees’ pension savings. ShareAction surveyed 25 FTSE 100 companies with some of the largest defined contribution pension schemes to assess how they protect employees’ savings against climate-related financial risks. 15 schemes participated in the research process, covering approximately one million workers and £17.5bn assets under management. Of the schemes assessed, only the HSBC Bank Pension Scheme and the RBS Retirement Savings Plan have changed their default investment strategies to reduce the carbon exposure of staff pensions. However, the research finds that 13 of these 15 major UK companies are backing initiatives to address climate risks such as the Science-Based Targets Initiative and the Taskforce on Climate-related Financial Disclosures. (ShareAction)