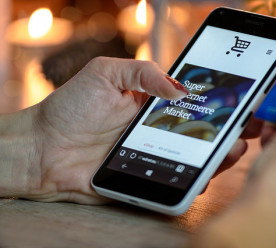 The rapid growth of e-commerce in the US has and consequent demand for logistics facilities has caused concern over the health implications of air pollution in smaller, rural areas where warehouse development is concentrated. The stream of heavy trucks coming to and from these large facilities has caused concern over the health implications of exposure to particulate pollution from diesel engines. In Southern California, one of the largest hubs for warehouses in the US, a new lawsuit filed by environmental law firm Earthjustice on behalf of the local Centre for Community Action and Environmental Justice, alleges that the review process for the project didn’t properly factor in air pollution and traffic impacts. Adrian Martinez, a staff attorney for Earthjustice, says “This will be…part of the shifting landscape of American consumerism. People often don’t think about, how does this package…get here. All along the way, there’s places where toxic pollution is essentially poisoning communities.” (Business & Human Rights; Curbed)

The board of Nissan voted to remove Carlos Ghosn as its chairman today, three days after he was arrested and taken into custody on allegations that he drastically underreported his income to government regulators over a period of several years. The board’s decision removes Mr. Ghosn, one of the world’s most powerful car industry leaders, from his position at the helm of the company he led for 19 years. It is also the opening salvo in what is likely to be an extended power struggle between Nissan and its alliance partner Renault of France, which is Nissan’s largest shareholder. The arrest on Monday came after an internal Nissan inquiry that found Mr. Ghosn had underreported his compensation to the Japanese government for several years. He has yet to be charged with a crime. (New York Times)

The amount of carbon dioxide in the atmosphere hit a new record last year with emissions showing no sign of slowing down, the U.N. World Meteorological Organization said today. The annual Greenhouse Gas Bulletin found CO2 levels of 405.5 parts per million in 2017, up from 403.3 ppm in 2016. The report dashed hopes for a slowdown in emissions of CO2 – the byproduct of burning fossil fuels that scientists say is the main cause of the greenhouse effect causing global warming. “The science is clear. Without rapid cuts in CO2 and other greenhouse gases, climate change will have increasingly destructive and irreversible impacts on life on Earth. The window of opportunity for action is almost closed,” WMO Secretary-General Petteri Taalas said in a statement. (Reuters)

The UK government should introduce a new tax on virgin packaging to revolutionise the recycling system in the country and tackle the plastics crisis, according to a new report. The study, presented to MPs and industry figures at Westminster on Tuesday evening, calls on ministers to impose a fee on packaging materials and offer a rebate for those products that use more recycled material. The WWF and the Resource Association, which commissioned environment consultancy Eunomia to produce the report, said the proposals would transform the UK’s broken recycling system – and drastically reduce the demand for raw materials, including fossil fuels. The new report follows an announcement in October that the government is launching a consultation on the introduction of a tax on all plastic packaging with a recycled content of less than 30 percent. (Guardian)

Many European asset managers commit to responsible investment but do not actively incorporate this into how they convey their identity, according to two Swiss brand consultancies. Brand Affairs and H-Ideas – which advise companies on branding and marketing – analysed 239 European investment groups ranked in IPE’s Top 400 Asset Managers to evaluate whether management companies’ “good intent” was also communicated through their brands. The companies collated the data in the ‘H&K Responsible Investment Brand Index’. More than three-quarters (184) of the managers analysed formally committed as responsible investors, but most of these (147) “miss the opportunity to share their approach and actively incorporate it into their brand”, according to the index report. Only 13 companies had a clearly articulated purpose, of which only three “truly connect to a greater societal impact”: Hermes Investment Management, AXA Investment Management and Swedbank Asset Management. (IPE)

Image source: shopping by Matt Madd on Flickr. CC BY 2.0.