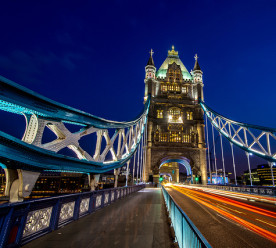 Speaking of one the deadliest American wildfires in a century, Trump initially blamed state officials for poor forest management in making the fires in northern and southern California worse and even threatened to cut off federal funding. Firefighters continue to battle the blaze, which covers an area of about 600 square kilometres (149,000 acres). At the scene on Saturday, Trump recounted a conversation he had in Paris on 11 November with Finland’s president Sauli Niinisto, who talked about monitoring forest resources with a good surveillance system. Trump said wildfires weren’t a problem in Finland because the Finns “spend a lot of time on raking” leaves and “cleaning and doing things”. Later, a reporter asked Trump if visiting the devastated region had changed his opinion about climate change, about which he has said he doubts. Trump responded: “No.” (Guardian)

Eighty-five people have been arrested as thousands of demonstrators occupied five bridges in central London to voice their concern over the looming climate crisis. Protesters, including families and pensioners, began massing on five of London’s main bridges from 10am on Saturday. An hour later, all the crossings had been blocked in one of the biggest acts of peaceful civil disobedience in the UK in decades. Some people locked themselves together, while others linked arms and sang songs. The move is part of a campaign of mass civil disobedience organised by a new group, Extinction Rebellion, which wants to force governments to treat the threats of climate breakdown and extinction as a crisis. Jenny Jones, the Green party peer, joined the protest on Westminster Bridge. “Basically, conventional politics has failed us – it’s even failed me and I’m part of the system – so people have no other choice,” she said. (Guardian)

Apple’s chief executive Tim Cook said new regulations for the tech industry are “inevitable” in the wake of a series of scandals, rejoining a debate that is intensifying along with political pressure on the company’s rival, Facebook. In an interview aired on Sunday, Mr Cook said “the free market is not working” and politicians will step in. His comments come amid simmering tension between Apple and Facebook. “Generally speaking, I am not a big fan of regulation,” he said. “I’m a big believer in the free market. But we have to admit when the free market is not working. And it hasn’t worked here. I think it’s inevitable that there will be some level of regulation…I think Congress and the administration at some point will pass something.” (Financial Times)*

Researchers from Imperial College London and consultancy firm E4tech are warning of a two-tier emerging as Britain undergoes an energy revolution. While many businesses and homes across London, Scotland and the East are set to benefit from clean growth and lower energy bills, research has found that regions such as Wales, Yorkshire and the East Midlands are falling behind. Some of these regions are suffering from low energy efficiency ratings, while cost of heating, combined with lower average incomes in these areas mean that fuel poverty rates are particularly high. Imperial’s Dr Iain Staffnell said: “We are creating an energy system which will power our future economy and help tackle climate change. “But, our research reveals that Britain is at risk of creating a two-tier economy, leaving millions of families and businesses less well equipped to enjoy cheaper bills and better health outcomes.” (Edie)

The world’s leading certification body for ethically sourced palm oil has ordered a total ban on deforestation by its members, amid growing pressure from both companies and consumers. Members of the Roundtable on Sustainable Palm Oil (RSPO) voted overwhelmingly in favour of the ban at the group’s annual general assembly in Malaysia last week. The ban is now part of the RSPO’s new core standards, the Principles and Criteria (P&C), which member companies must comply with for their product to be certified “sustainable.” While the RSPO’s previous standards prohibited the clearing of primary, or virgin, forest to make way for palm plantations, they did allow for the cutting of secondary forests and peat forests with a peat layer less than 3 meters (10 feet) deep. The RSPO’s chief executive, Datuk Darrel Webber, welcomed the newly adopted set of standards, calling it “the most inclusive review of its kind, to date.” (Eco-Business; Mongabay)

With our planet facing near irreversible collapse coupled with increasing societal pressures, rapid innovations and changes in technology, businesses face challenging times ahead. These challenges, however, provide new opportunities to transform industries and societies. It’s time for business to embrace these opportunities and lead to a new clean and sustainable future. Find the brochure here: http://1.ethicalcorp.com/LP=21639