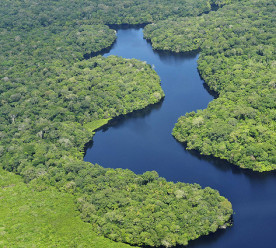 The world’s largest asset managers could play a pivotal role in safeguarding the Amazon forest, a report published in Global Environmental Change shows, amid concerns Brazil’s president-elect Jair Bolsonaro could remove environmental barriers to economic activities in the Amazon. The report reveals that US asset managers BlackRock, Vanguard and State Street have major holdings in corporations driving deforestation in the country, including beef and soy companies. Taken together, the group own between 15-20 per cent of shares in soy exporting companies Archer Daniels Midland (ADM) and Bunge. “Considering the political situation in Brazil, finance will become a very important aspect in trying to protect the Amazon. All of these comments from investors on sustainability: now would actually be the time to step up and use that influence in a good way,” said lead author Victor Galaz, deputy director and associate professor at Stockholm University’s Resilience Centre. (Business Green)*

Most big companies operating in sectors at high risk of labour abuses are failing to meet human rights standards set by the United Nations, according to an analysis of 100 major companies published today. From tackling child labour to ensuring equal treatment for women, U.N. principles require all businesses prove they are committed to human rights and treat workers fairly. But an analysis of more than 100 major apparel, agricultural and extraction firms by the Corporate Human Rights Benchmark (CHRB), a British charity, found many had little to show for. More than 40 percent of businesses analysed scored zero on human rights due diligence – the practice of identifying and addressing the risk of abuses. Sportswear giant Adidas came top in the ranking, followed by miners Rio Tinto and BHP Billiton. Coffee chain Starbucks and fashion houses Prada and Hermes ranked among the worst. (Reuters)

Supermarkets, retailers and major drinks brands in the UK are set to pay tens of millions of pounds more towards recycling their used packaging under the government’s new waste strategy expected to be published this month, the Guardian understands. Ministers are considering several options to improve recycling, stop abuses to the export market in plastic packaging and make companies pay more towards collecting and recycling their own waste. Sources with knowledge of the new waste strategy, which is due to be published in a few weeks, said it contained plans to significantly increase contributions from retailers and producers from an average of about £70 million a year to between £500 million and £1 billion a year. There are also plans to increase the number of companies who have to contribute to include smaller producers. (Edie)

Australia’s Actuaries Institute has developed an index to measure extreme weather conditions and sea level changes, to help insurers and other businesses assess the evolution in anomalous weather changes. The Australian Actuaries Climate Index series track how often extreme temperatures, heavy rainfall, dry days, strong wind and sea level changes occur. The institute is considering supplementing the index with figures on property damage, for instance, according to early reports. Launched today, the project and an accompanying report covering 37 years of data was designed with input from insurance analysts, Australia’s Bureau of Meteorology, the Commonwealth Scientific and Industrial Research Organisation (CSIRO), and insurance regulators. The Actuaries Institute’s chief executive Elayne Grace told the media that financial institutions could draw on the index to report their climate risk, through frameworks such as the Taskforce on Climate-Related Financial Disclosures. (Environmental Finance)*

Unilever have announced the start of a strategic partnership with Bio-on, specialists in biotechnologies, to develop, produce and sell personal hygiene and care products that guarantee a smaller or no environmental impact. Using patented bio-technologies for natural, biodegradable microplastics production, Unilever and Bio-on are taking an important step towards building a more sustainable economy and more responsible consumption in the personal care sector. This collaboration is designed to meet the demands of consumers, who are increasingly concerned about sustainability and making purchasing choices that respect the environment, whilst making the most of the skills and excellence at both companies. “For Unilever, developing a partnership with…Bio-on is an important step towards the goals we have set ourselves with the Unilever Sustainable Living Plan, primarily to halve the environmental impact of our products by 2030,” said Fulvio Guarneri, Chairman & CEO of Unilever Italia. (Global News Wire)