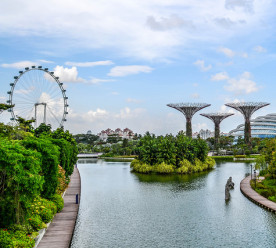 The World Bank wants to trigger a flurry in investments in health and education after releasing a ranking of countries based on measures of “human capital” — including childhood mortality and years in schooling. The classification, unveiled at the World Bank and IMF’s annual meetings in Indonesia, aims to spur a wide-ranging change in policies, particularly across the developing world, to reflect a growing belief by the organisation that investments in people should be given more weight compared to investments in infrastructure as drivers of economic growth. “This is a tool for everyone, but it is a tool especially for heads of state and ministers of finance so they know exactly where they stand compared to everyone else,” World Bank President, Jim Yong Kim, told reporters. (FinancialTimes)*

Two MPs in the Chilean Parliament have called for the adoption of blockchain technology according to online local news site Fortin Mapocho. The objective of the proposed implementation is to increase cyber security standards and reduce bureaucracy in public administration in Chile. In the proposal, Miguel Angel Calisto and Giorgio Jackson, along with eight other MPs, appeal to President Sebastian Pinera, urging him to implement blockchain in all public areas of the country. Introducing the resolution to parliament, Jackson argued that storing said data in a decentralized system would significantly help reduce those costs. MP Calisto also stressed that blockchain technology could guarantee the accuracy of all information kept. “With this technology,” he explained, “we could also transparently manage the work carried out by the different public agencies, with their indicators and all the data collected, reducing the possibility that this information is used maliciously by others.” (The Santiago Times; TheBitcoinMag)

Amazon’s machine-learning specialists uncovered that their new recruiting engine showed bias against women. The team had been building computer programs since 2014 to review job applicants’ resumes with the aim of mechanizing the search for top talent. By 2015, the company realized its new system was not rating candidates for software developer jobs and other technical posts in a gender-neutral way. That is because Amazon’s computer models were trained to vet applicants by observing patterns in resumes submitted to the company over a 10-year period, most of which came from men. In effect, Amazon’s system taught itself that male candidates were preferable, penalizing resumes that included the word “women’s.” Amazon said the tool “was never used by Amazon recruiters to evaluate candidates.” (Fast Company; Reuters)

Oxfam has rejected Singapore’s defence of its low taxes after the NGO ranked the wealthy city state among the 10 worst-offending countries in fuelling inequality with its low-tax regime. Oxfam’s Commitment to Reducing Inequality (CRI) index ranked Singapore 149th of 157, below Afghanistan, Algeria, and Cambodia, and marginally higher than Haiti, Nigeria and Sierra Leone. The index assesses social spending, taxation and labour policies. Oxfam’s head of inequality policy, Max Lawson, said the impact of Singapore’s tax policy went beyond its borders, serving as a tax haven for the rich and big corporations. “Singapore’s harmful tax practices mean that they are eroding the revenue of other countries in the region and globally, revenues that those countries could be investing in schools and hospitals,” Lawson told Reuters. (Reuters)

The first ever commercial garments labelled with the voluntary Responsible Wool Standard (RWS) from Textile Exchange have recently debuted in store at Marks & Spencer, Eileen Fisher and Arket – the lifestyle concept store from H&M, which was launched last year. The RWS is a voluntary global standard that addresses the welfare of sheep and the deals with the environmental impact of the land that they graze on in a bid to ‘improve best practice’ among woolgrowers. “Wool is central to our assortment as it is both beautiful and durable,” said Karin Brinck, sustainability manager, Arket, adding that RWS certification “is a way to contribute to a more traceable and responsible supply chain both for the animals and their environment.” (EcoTextile)

In the context of a growing world population, dwindling agricultural resources and rising concerns about climate change are adding pressure to an already strained global food system, the annual Chatham House Food conference will explore practical solutions to build a more resilient food system and feed the global population sustainably, focusing on the responsibility of key actors in achieving these goals.

Register now to reserve your place.