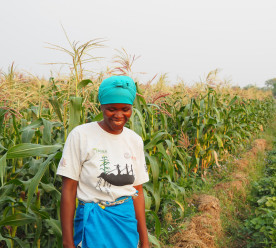 To mark World Environment Day on 5th June, Unilever launched its Sustainable Nutrition Manifesto a roadmap to becoming a progressive food company. The company identifies a growing “farm to fork disconnect”: an ever increasing urban population resulting in obesity and its related health problems combined with a shrinking and aging rural population resulting in poverty and malnutrition. Farming uses up to three-quarters of the world’s available freshwater and agriculture-related deforestation, livestock emissions and soil degradation are significant contributors to climate change. Amanda Sourry, President of Unilever’s Foods category, explained that, while the global food system is broken, there are reasons to be hopeful that the problem can be fixed. Technology is playing a big role in changing the food value chain for the better, improving techniques and logistics to transform how we grow and transport food. And innovation in urban agriculture – such as the rise in technology-driven vertical farming – may soon give some city dwellers access to locally grown produce. Alongside this report, Unilever announced that they are kicking off a Farm to Fork series – a collection of blogs, videos and infographics in partnership with other organisations and individuals – calling for large-scale change to the food system. (Unilever)

The UNDP have stated that it is integral that when countries determine how they are going to implement their commitments under the Paris Agreement on climate change, gender equality concerns are considered and integrated from the very beginning. They argue that while climate change threatens livelihoods and security across the board, women and girls commonly face higher risks and greater burdens from climate change, particularly when they are living in poverty. Despite their substantial role in agriculture, for example, women across regions have less access than men to productive resources and opportunities – from land and livestock to education, agricultural extension, financial services, and technology.  Levelling this playing field would have a dramatic impact on agricultural production and food security and build community resilience to climate change. According to the UN’s Food and Agriculture Organization, simply giving women the same access as men to agricultural resources could increase production on women’s farms in developing countries by 20 to 30 percent, raising total agricultural production in developing countries by 2.5 to 4 percent. The German Government have launched a 10-country wide initiative to help countries ensure that women both benefit from and participate equally in climate change mitigation. (UNDP)

Fifty of the world’s largest businesses, retailers and fishing companies from across the tuna supply chain have banded together to stamp out illegal, unreported and unregulated fishing in their industry, protect the health of oceans and eliminate forced labour from fishing vessels. Launched at the United Nation’s first global Ocean Conference, the Tuna 2020 Traceability Declaration aims to stop illegal tuna from coming to market. Illegal, unreported and unregulated fishing accounts for 26 million metric tons of fish, or $24 billion, in theft each year. Tuna and many other keystone species are included in these numbers. Overfishing of these species can significantly impact ocean health and cause population collapse, as seen already seen with Bluefin tuna, whose populations will take decades to fully recover. As part of the Declaration, signatories committed to: tuna traceability, socially responsible tuna supply chain, environmentally responsible tuna sources and government partnership. (Sustainable Brands)

In an effort to tackle some of the biggest challenges facing the world today, National Geographic and GSK Consumer Healthcare have joined forces to launch the Chasing Genius Challenge. The competition aims to uncover innovative solutions for issues related to sustainability, global health and food security and will provide $25,000 to winners to scale their ideas. Using the hashtag #chasinggenius, National Geographic has crowdsourced ideas and identified issues that the global community is most concerned about:

To participant in the challenge, applicants are asked to create and submit one-minute videos describing their “genius” idea and how it tackles one of the aforementioned challenges. (Sustainable Brands)

The UK could be a green business powerhouse in the next three decades, but only if given proper support by government, the Aldersgate Group representing more than 30 low-carbon companies has said. The low-carbon economy in the UK employs at least 432,000 people, with a turnover of more than £77bn in 2015. This is larger than industries such as car-making and steelmaking. A group representing more than 30 of the UK’s green and low-carbon companies including Kingfisher, Aviva Investors, Anglian Water, Siemens and Scottish and Southern Energy, forecast that the low-carbon economy would rocket from 2% of the UK’s GDP today to 13% in the next three decades, boosting both manufacturing and services, but only with government support. The business leaders urged politicians across the spectrum to respond, as the policies of the next government will play a major role in determining how the sector develops and whether job opportunities are realised. (Guardian)