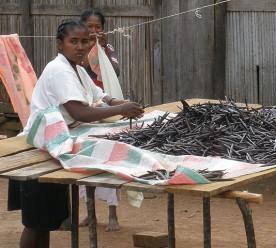 According to a new report by research and media centre Danwatch, the vanilla supply chain is keeping farmers in Madagascar locked in a cycle of exploitation, poverty and child labour. Roughly 80% of the vanilla sold on the global market comes from Madagascar. The International Labour Organisation estimates 20,000 children are working in the Madagascan vanilla trade. The Madagascan authorities have attempted to regulate the industry, introducing a code of conduct in 2015. However, resources to implement the code are insufficient. The Danwatch report claims that the plight of Madagascan farmers has been largely ignored by exporters and retailers. (Guardian)

The chairman of Sports Direct has criticised MPs, trades unions and the media as the retailer reported a 57% drop in first-half profits. An undercover Guardian investigation last year exposed how Sports Direct workers were being paid less than the minimum wage. Chairman Keith Hellawell said an “extreme political, union and media campaign waged against this company” had damaged its reputation, influenced customers and had a negative impact on the morale of Sports Direct’s staff. He added: “I begin to question whether this intense scrutiny is all ethically motivated.” But Institute of Directors director general Simon Walker said: “The problem with Sports Direct is fundamentally [chief executive] Mike Ashley, who owns more than half the company and is totally dominant. It needs a board that is capable of standing up to him so that the normal checks and balances that apply to most companies are in place.” (Guardian)

Online ads for food and drinks high in fat, salt or sugar aimed at children are to be banned under new rules from UK advertisers. The Committee on Advertising Practice (CAP) said the rules were a response to research suggesting children aged five to 15 spent about 15 hours online every week. Last month, the World Health Organization warned that governments should be protecting children from targeted junk food adverts in apps, social media and video blogs. While the CAP acknowledged the impact of the rule changes could be small, it said they demonstrated the industry was putting “the protection of children at the heart of its work”. Malcolm Clark, co-ordinator of the Children’s Food Campaign, said there were still too many loopholes, and that it was unclear exactly which ads would be banned under the rules. (BBC)

Following the successful launch of the GRI Standards, the Global Reporting Initiative (GRI)’s standards board has outlined its high-level priority areas for the next three years, including supporting the implementation of the Standards, developing sector specific guidance, and updating Standards on a regular basis. The first two Standards scheduled for review are GRI 303: Water and GRI 403: Occupational Health and Safety. Later in 2017 the Standards Division also expects to start discussions to update GRI 201 Economic Performance and GRI 306: Effluents and Waste, as well as human rights related Standards. In addition, GRI will monitor developments  related to the Task Force on Climate-related Financial Disclosures (TCFD), whose recommendations to the G20 are set to launch next week. (GRI)

Parisians can use public transport for free for the second day running due to a spike in air pollution, and some cars have been barred from the roads. Paris mayor Anne Hidalgo said images of smog blanketing the capital were proof of the need to reduce vehicle use in the city centre. “This is a record period (of pollution) for the last 10 years,” Karine Leger of AirParif said. Along with odd-numbered cars, only hybrid or electric vehicles as well as those carrying three or more people will be allowed to roam the roads. Foreign and emergency vehicles will be unaffected. The Paris prefect, Michel Cadot, said the ban would be extended to a third day if required. (Independent)