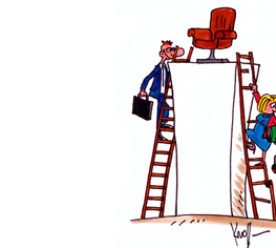 Pay Scale – What is the Gender Pay Gap?

PayScale‘s Gender Pay Gap report examines the difference in median earnings of men and women overall, as well as by U.S. state and also the progression for each gender by age group, as well as responses to questions on workplace gender issues. This stat is representative of the uncontrolled—or “raw”—gender pay gap, which looks at a median salary for all men and women regardless of job type or worker seniority. The median salary for men is roughly 24 percent higher than the median salary for women. The more stubborn gap is one of opportunity rather than “equal pay for equal work.” When we compare men and women who hold the same jobs, the median salaries are significantly closer and the pay gap becomes less substantial. Nevertheless, women are significantly less likely than men to hold management roles. This “opportunity gap” is one reason for the existence of the uncontrolled gender pay gap. However, in 2016, both the uncontrolled and controlled gender pay gaps shrunk, compared to 2015. PayScale addresses that education and men and women’s perception of workplace gender inequality will play a huge role (PayScale)

Energy giant Centrica has launched a new local energy market trial in Cornwall in a bid to test how a more distributed grid could help generation be managed closer to the point of demand. The firm announced plans on Friday to develop a “virtual marketplace” in the area over a three year trial period, which will see participants use smart technologies to sell their flexible energy capacity to both the grid and the wholesale energy market. The scheme plans to provide free smart technology upgrades to renewable generators, local businesses, and other large energy users and will work with them to install new energy storage units in a bid to help them to unlock new revenue streams. The £19m programme is being funded using a £13m grant from the European Regional Development Fund alongside investment from Centrica and the British Gas Energy for Tomorrow fund, while partners on the trial include Western Power Distribution, National Grid and Exeter University. (Business Green)

The United Nations Conference on Trade and Development (UNCTAD), which co-organises the Sustainable Stock Exchange (SSE) initiative, has received confirmation from 21 international stock exchanges that they will introduce new guidelines either this year or within the first quarter of next year. Just two stock exchanges – Norway’s Oslo Børs and Spain’s Bolsas y Mercados Españoles – have implemented the new standards, but more are expected to introduce them before the end of the year. Launched by UN Secretary-General Ban Ki-moon in 2009, the initiative now includes over 60 stock exchange. The UK’s LSE is one of 23 exchanges that had committed to introduce new standards on sustainability reporting in 2016. LSE’s latest CSR report highlights a commitment to the long-term sustainability and profitability of the business, which has achieved its overall 2020 target of a 20% reduction in tCO2e/£m revenue, and a 20% reduction in total waste produced against a 2013 baseline. (edie)

Swiss commodity traders were accused in a report published in September by Swiss NGO Public Eye of exporting fuels to West Africa with sulphur levels that are sometimes hundreds of times higher than European levels. The report accused oil companies of “regulatory arbitrage”, allowing traders and companies to exploit weak standards to export cheap, dirty fuels in a process that Public Eye said was maximising profits at the expense of African’s health. Erik Solheim, the head of UN Environment said: “Air pollution is killing millions of people every year, and we need to ensure that all countries urgently introduce cleaner fuels and vehicles to help reduce the shocking statistics.” Oliver Classen, spokesman for Public Eye called on the government of Switzerland to impose “mandatory human rights and environmental due diligence standards”, adding: “It should cover the entire supply chain and including potentially damaging products.” (Guardian)

China is fast emerging in the battle against global warming. A planned nationwide carbon trading scheme set to be put in place in 2017 is likely to be more than twice the size of European Union’s Emissions Trading System (ETS), which is currently the world biggest carbon market. Carbon trading is the system of buying and selling credits tied to the emission of greenhouse gases (GHGs). The implementation of a nationwide carbon market is one ingredient in Beijing’s overall plan to reach peak emissions by 2030, and thereafter radically reduce output of GHGs. Carbon trading is also seen by Chinese officials as a way of tackling the country’s serious air pollution problems and related health issues. The ETS system in Europe, which started operating in 2005, has failed to establish carbon prices that properly reflect the environmental damage caused by CO2 and other GHGs.  A new report by Climate Tracker, says falling energy demand, plus tighter regulations on GHG emissions, mean that China’s coal sector faces chronic overcapacity. (Ecobusiness)