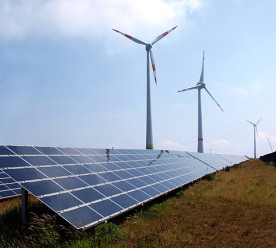 Consumers want phone manufacturers to implement new business models that provide for longer-lasting batteries and greater recyclability options. That is the finding of a new Greenpeace study, which surveyed 6,000 people from the US, China, Mexico, Russia, Germany and South Korea. According to the survey, more than half of consumers think manufacturers release too many models. “Companies… should make profit from good recycling, recovering materials and producing long-lasting batteries,” said Greenpeace’s Chih An Lee. The study arrives just one week after UK network O2 revealed it has enabled customers to save more than £135 million since 2009, by recycling two million old phones. Apple has also ventured into the repair market, launching a recycling robot named ‘Liam’ to regain valuable materials from discarded iPhones. (edie; Guardian)

Renewables jump 70 percent in shift away from fossil fuels

The share of electricity that the world’s 20 major economies are generating from the sun and the wind has jumped by more than 70 percent in the space of five years, according to new figures compiled by Bloomberg New Energy Finance. In a sign of the shift away from fossil fuels, G20 countries collectively produced 8 percent of their electricity from renewables in 2015, up from 4.6 percent in 2010.The UK, Italy and France all generated more than 19 percent of their electricity from renewables while Australia reached 11 percent. The growth has been especially striking in the UK, which generated 24 percent of its electricity from such renewables last year compared with just 6 percent in 2010. Still, fossil fuels continue to dominate the electricity supply in many countries, including the US and China. (Financial Times*)

At least 98 percent of the cars used daily on US roads could be replaced by electric cars on a single charge, according to new research. The study, published in Nature Energy, show fears over electric car batteries running out, known as ‘range anxiety’, could be misplaced for all but the longest days of driving. The paper highlights that long-distance journeys account for a small share of driving days, but a sizeable minority of miles driven, fuel use and emissions. These journeys will be the hardest to shift, along with their emissions, even as battery capacities increase. “The problem may be that when a car purchase is made, the customer wants to be able to make all of their trips, not just 90 percent,” said Willett Kempton from the University of Delaware. (Carbon Brief)

Joko Widodo, the Indonesian president, has scored a victory in his campaign to prosecute haze-causing companies. PT National Sago Prima (NSP), a subsidiary of major palm oil producer Sampoerna Agro, has been ordered to pay a record $76 million for letting fires ravage across land it controls in 2014. NSP lost its case against government prosecutors, who argued that the plantation firm was guilty of negligence in failing to prevent the fires which helped blanket the region in a toxic haze. The fires are an annual occurrence caused by cheap, slash-and-burn land clearing practices which are generally illegal but nevertheless employed by farmers and companies alike. Environmental groups argue that under Indonesian law, firms are “strictly liable” for fires in their concessions whether or not they can be shown to have actually started the fires. (Eco-business)

PwC, the world’s biggest professional services firm,  is being sued for a record $5.5 billion for failing to detect fraud that led to a bank collapse during the global financial crisis, in a case that could bring more auditing firms into the line of fire. Since the financial crisis, banks have paid out hundreds of billions of dollars in settlements. But there have only been a handful of significant cases involving audit firms, which have argued they cannot be held liable for missing signs of fraud. The case accuses PwC of failing to catch a multibillion-dollar conspiracy between the founder of now defunct mortgage underwriter Taylor, Bean & Whitaker, and executives at Colonial Bank, an Alabama-based lender. PwC gave the bank’s parent, Colonial BancGroup, a clean audit opinion from 2002 to 2008. Colonial, however, collapsed in 2009, becoming the sixth-largest US bank failure in history. (Financial Times*)