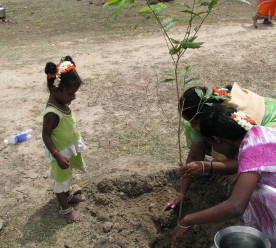 Outdoors wear company Timberland has partnered with the NGO Smallholder Farmers Alliance (SFA) to transform the agricultural practice at roughly 1,000 farms while planting millions of trees throughout Haiti, heavily deforested since its devastating earthquake five years ago. The project trains farmers on improved agricultural techniques; in return, the farmers raise trees from seedlings and plant them on their land and in communal areas within their communities. Proceeds from the sale of excess tree seedlings cover the cost of additional benefits including a seed bank and micro financing programs. According to Timberland and SFA, the long-term goals for this alliance are to build farmers’ wealth, while also developing potentially lucrative food exports for them in the future. So far the SFA estimates yields have increased on average 40 to 50 percent. (Sustainable Brands)

Nearly two billion people lack access to reliable and affordable modern energy, severely constraining their health, education and earning potential, says a new report from the Shell Foundation. According to the report, this energy deficit forms a “formidable barrier to inclusive growth and poverty reduction that shows limited signs of abating”, unless major changes are made to the way people access and use energy. Over the last 14 years, the Shell Foundation has worked with over 100 entrepreneurs and organisations, deploying nearly $74 million in an effort to develop new disruptive technologies and business solutions, including decentralised energy solutions that provide safe, reliable and affordable power to low-income consumers in under-served areas. The report outlines the lessons learned from this work, identifying six challenges to the growth of inclusive energy markets, and examining emerging opportunities to overcome them. (Shell Foundation)

US appliance-maker Whirlpool is displaying creative use of technology in its next-generation connected washer and dryer, unveiled at this week’s Consumer Electronics Show in Las Vegas. The company has found a way to turn a seemingly mundane chore, laundry, into an “act of love” that benefits NGO Habitat for Humanity. In addition to controlling the washing machine while away from home, Whirlpool’s mobile app enables users to automate donations to Habitat for Humanity (a longstanding Whirlpool partner) with every load of laundry. Whirlpool says that by doing what most families do daily, its customers can now help other families thrive. Jon Hall, senior brand manager, said “We’re committed to bringing to life technology with a true human touch. We study how individuals give and get care, and never use technology in a product that does not provide a useful, real benefit to the person using it.” (3BL Media; Sustainable Brands)

Sixteen British clean tech start-ups are set to travel to the US to take part in a government backed trade mission. The Clean and Cool Mission 2015 will this month travel to San Fransisco, taking with it 16 green companies, including BBOXX, Green Fuels Research, ADFerTech, BuffaloGrid, Aziotic Technologies and Cumulus Energy Storage. Today, the group revealed that previous Mission alumni have collectively attracted more than £550 million in investment through the scheme. Kevin Baughan, director of technology and innovation at Innovate UK, one of the Mission’s organisers, said the level of investment achieved by previous attendees was “incredible”. “We’re really excited about the 16 companies selected for this year’s trip,” he said. “Each chosen company has shown us new and exciting clean tech solutions with huge potential.” (Business Green)

Governments need to plan better for rising migration driven by climate change, experts said on Thursday, citing evidence that extreme weather and natural disasters force far more people from their homes than wars. Projections by leading climate scientists of rising sea levels, heatwaves, floods and droughts linked to global warming are likely to force millions of people to move out of harm’s way, with some never able to return. “Natural disasters displace three to 10 times more people than all conflicts and war in the world combined,” said Jan Egeland, head of the Norwegian Refugee Council which runs the Internal Displacement Monitoring Centre (IDMC) in Geneva. Chaloka Beyani, the United Nations’ special rapporteur on the human rights of internally displaced persons, told Reuters that governments should step up planning for migrants. “For the future we are looking more to planned relocations for people who are prone to frequent hazards,” he said. (Reuters; The Guardian)