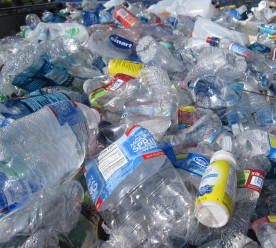 Coca-Cola, PepsiCo and Danone are among ten major food & beverage and consumer goods firms facing accusations of covertly lobbying against stronger plastics-related legislation, in spite of their public commitments to tackle plastics pollution. The report from the Changing Markets Foundation accuses each of these businesses of being a member of at least two trade bodies which have lobbied against stricter policies since 2018, with Danone accused of partaking in ten such actions. Aside from lobbying, the Changing Markets Foundation report identifies several other key tactics which corporates are using to “externalise” responsibility for the plastics they produce and distribute. Through advertisements, public engagements and meetings with policymakers, the named companies have repeatedly cited consumers as the cause of plastic pollution and suggested that the costs of tackling the problem should lie with governments, local authorities and waste managers, the report states. (Edie)

Canada has launched a fund to invest in community-based projects to curb emissions, with bulk of the money coming from a fine that Volkswagen AG paid for breaking the country’s diesel emissions rules. The C$206 million ($157 million) fund is part of the government’s new Climate Action and Awareness Fund which seeks to boost climate science research by empowering youth and communities. “The new Climate Action and Awareness Fund will create jobs for Canadians in science and technology, academia, and at the grassroots community level,” Johnathan Wilkinson, minister of environment and climate change, said in statement. In January, a judge in Canada approved a C$196.5 million fine against Volkswagen after the company pleaded guilty to dozens of counts of diesel emissions violations. The fine was by far the largest environmental penalty in Canadian history, prosecutors said. (Reuters)

All of the rivers, lakes and streams in England are polluted, says the Environment Agency. The figures reveal a lack of progress towards the target of 100% healthy waters by 2027. The most problematic pollutants are chemical sewage discharge, farming, and industrial chemicals. In 2016, when figures were last published, 16% of waters were classed as good. In fact, water quality hasn’t deteriorated since then – but it hasn’t improved as promised. The figures appear to have got worse because stricter tests brought in by the EU have shown up levels of long-banned pollutants such as PCB in the tissues of living organisms. The Environment Minister Rebecca Pow said the data showed urgent action was needed to reduce sewage discharge and address pollution from agriculture and chemicals. Water UK, which represents water companies, said farmers were mostly to blame. The farmers’ union NFU said farmers had greatly reduced the amount of chemicals they used but recognise that more needs to be done. (BBC)

Sugar company Tate & Lyle has joined the growing band of 65 food and drinks companies worldwide to secure approval for its greenhouse gas reduction goals from the Science-Based Targets initiative, with the ingredient supplier aiming to cut its emissions by almost a third over the next decade. The UK manufacturer yesterday said its target to slash its Scope 1 and 2 emissions by 30 per cent by 2030 has officially been approved, putting the company in line with the Paris Agreement’s lower ambition goal to limit global average temperature rise this century ‘well below’ 2°C. Tate & Lyle’s pledge to reduce CO2 from its value chain – also known as Scope 3 emissions – by 15 per cent over the same period has also secured approval, it said. (Business Green)

A vast fleet of Chinese fishing vessels just off the Galápagos Islands logged 73,000 hours of fishing during just one month as it pulled up thousands of tonnes of squid and fish, a new report based on data analysis has found. Nearly 300 Chinese vessels accounted for 99% of visible fishing just outside the archipelago’s waters between 13 July and 13 August this year, according to analysis by marine conservation group Oceana. China is ranked as the world’s worst nation in a 2019 IUU fishing index. Its fleet, by far the largest in the world, is regularly implicated in overfishing, targeting of endangered shark species, illegal intrusion of jurisdiction, false licensing and catch documentation, and forced labour. The Galápagos Marine Reserve is a Unesco world heritage site and covers more than 133,000 sq km around the archipelago. It is an oasis for ocean biodiversity with more than 20% of its marine species found nowhere else on earth. (The Guardian)