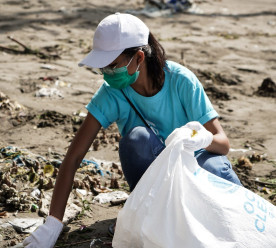 At least $10 billion (£7.9 billion) worth of gold, platinum and other precious metals are dumped every year in the growing mountain of electronic waste that is polluting the planet, according to a new UN report. A record 54 million tonnes of “e-waste” was generated worldwide in 2019, up 21 per cent in five years, the UN’s Global E-waste Monitor report found. The 2019 figure is equivalent to 7.3kg for every man, woman and child on Earth, though use is concentrated in richer nations. The amount of e-waste is rising three times faster than the world’s population, and only 17 per cent of it was recycled in 2019. The report blames lack of regulation and the short lifespan of products that are hard or impossible to repair. E-waste contains materials including copper, iron, gold, silver and platinum, which the report gives a conservative value of $57 billion. “Improper e-waste recycling is a major emerging hazard, silently affecting our health and that of future generations,” said Maria Neira at the World Health Organization. (The Guardian)

Boohoo to investigate use of Leicester factory with ‘unacceptable’ conditions

The online fashion retailer Boohoo has pledged to investigate how its clothes came to be made by a Leicester garment factory where workers were paid just £3.50 an hour in conditions that allegedly put them at greater risk of catching Covid-19. Shares in the company slumped by 9% on Monday morning, the first day since revelations about its supply chain came to light. Boohoo, which owns brands such as Pretty Little Thing and Nasty Gal, said conditions at the Jaswal Fashions factory in Leicester were “totally unacceptable and fall woefully short of any standards acceptable in any workplace”. This comes after an undercover reporter for the Sunday Times newspaper found staff being paid as little as £3.50 an hour in the factory, even though the minimum wage in Britain for those aged 25 and over is £8.72. Boohoo, which had a surge in sales during the pandemic, said it was not sure who was supplying its garments. (The Guardian)

A letter signed by NGOs Greenpeace, CPRE, Friends of the Earth, E3G, and Possible have urged UK Chancellor Rishi Sunak to transform the country from “zero-carbon heat laggard to leader” by adopting a range of measures that can stimulate the heat pump market. The groups warn the decarbonisation of heat is “the biggest gap” the UK faces in meeting its net zero target by 2050. Space heating and hot water in buildings accounts for 21 per cent of the nation’s greenhouse gas emissions, yet only 100,000 heat pumps were installed last year, a tiny fraction of the one million annual target required to meet the UK’s net zero target. The letter urges the government to commit to halving emissions from heating by 2030, an intermediate goal that would get the country “on track” to net zero. The charities stressed that heat pumps, rather than hydrogen, should be the government’s main medium-term focus for the decarbonisation of heating. (BusinessGreen)

Workers from Indonesia’s decimated tourism and hospitality sector have taken on new jobs created to clean the archipelago’s plastic-littered beaches. On Bintan island, usually a popular destination for Singaporean holidaymakers, furloughed workers have been hired by ocean clean-up and plastic offsetting firm Seven Clean Seas to comb the beaches for litter. The workers, which have been hired on a weekly contract basis, are being paid the same daily rate as their usual jobs, plus 25 per cent extra if they collect 25 kilograms of plastic. Indonesia’s tourism and hospitality sector, which employs 9 per cent of the country’s workforce and contributes to 4 per cent of the economy, has been hit hard by the Covid-19 pandemic. Tom Peacock-Nazil, founder of Seven Clean Seas, noted that the collected plastic will contribute to the plastic offsetting schemes. Corporates pay the firm to offset the plastic they use through recovery schemes such as beach clean-ups. (Eco-Business)

A start-up that helps rural Bangladeshi owners of home solar power systems trade their surplus electricity with their neighbours has won an international award for climate change innovation. SOLshare, set up in 2014, aims to stem the waste of more than a billion dollars in energy each year when home battery storage systems connected to solar panels reach capacity and excess solar power generated goes unused. Bangladesh is one of the world’s leaders in solar home systems for off-grid communities, with more than 5 million of the systems now in place. Bangladesh’s government, which aims to boost its use of renewable energy to 10 per cent of electrical power demand by next year, said it saw SOLshare’s device as a useful part of the push. Bangladesh, however, also plans to build new coal-based power plants over the next two decades, which are likely to dramatically boost its dependence on highly polluting coal, according to environment groups. (Eco-Business)