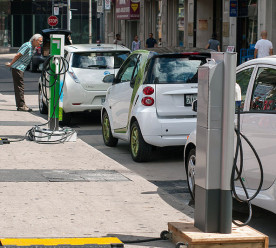 Apple, Twitter, LinkedIn and Youtube have joined a growing corporate movement to crackdown Neo-Nazism and hate speech following Trump’s defence of Charlottesville’s far-right rally participants. Following the lead of Airbnb, Spotify, Google and others, Apple CEO Tim Cook pledged $1m donations to the Southern Poverty Law Center (SPLC) and the Anti-Defamation League. It also said it would roll out donation systems for the SPLC through its iTunes store. Twitter has removed accounts affiliated with neo-Nazi site the Daily Stormer while LinkedIn has suspended a page devoted to the website and another page belonging to a man associated with it. YouTube also started terminating accounts linked to white supremacists, including that of a web commentator who has said on his site that he had attended the Charlottesville rally, whose Facebook’s accounts were also removed. (Guardian)

Some U.S. Democrats see tax overhaul as a path to taxing carbon

With a sweeping overhaul of the U.S. tax code coming soon, Rhode Island and Hawaii Senate Democrats have proposed to use a portion of the carbon tax revenue to reduce the top marginal corporate tax income rate, as called for by the White House. Over the first 10 years, the carbon tax could yield $2.1 trillion dollars. Although Senate Democrats did not mention to Republican leaders a carbon tax as part of their conditions for bipartisan tax reform, supporters note that if the White House hopes to cut tax rates without raising the deficit, it will need to find new, taxable economic activity. The legislation calls for the tax, which would increase annually by 2%, to be collected at its source — at coal mines, oil refineries or ports of entry. (NY Times)

Scientists have found an unexpected new source for lithium, a key component in battery-powered electric vehicles (EVs) and other renewable energy technologies: supervolcanoes. Most of the world’s lithium comes from Chile and Australia, and expanding access to the mineral is crucial for meeting demand for new green technologies, Stanford University scientists said. Scientists have studied the contents of supervolcanoes – which are much larger than ordinary volcanoes and erupted millions of years ago – in Oregon, Nevada and other parts of the Unites States. The discovery comes as more companies, including carmakers such as Tesla or Volvo are working to develop climate-friendly technologies. The number of EVs on roads worldwide rose to a record high of 2 million last year, according to the International Energy Agency (IEA), accounting for 0.2% of the global count. (Eco-Business)

The UK government’s £2.3bn ($3bn) has sold the Green Investment Bank (GIB) to Australian bank Macquarie, putting an end to widespread criticism and months of negotiations over fears that the sale would threaten the bank’s mission to drive green investments. Macquarie insisted it would maintain the bank’s core ethos, promising to invest at least £3bn in low-carbon projects over the next three years. Kelvin Smith, chair of the GIB, said this new ownership meant that “the business will have the support it needs to deliver a growing green impact, at home in the UK and now abroad”. A new name has been announced – the Green Investment Group (GIG) – as the legal implications of being termed a ‘bank’ could have hampered its plans of international expansion. A group of independent trustees – the Green Purposes Company – was also set up to ensure that all investments made through the GIG are in line with the bank’s green purpose. (Business Green)

The manager of California’s electric grid has told state regulators that clean energy could be substituted for a proposed natural gas plant in Ventura County but at a higher cost. The proposed plant would replace an older facility, which is estimated to cost $299 million against $309 million and $1.1 billion for the three alternatives considered in the report, which focused largely on the use of solar power and energy storage. Even with the statement about potentially higher costs, the report received praise from opponents of the proposed natural gas plant who argue that building the power facility would continue a long practice of locating industrial operations in disadvantaged communities. Ventura County residents have flooded the California Energy Commission with letters objecting to the project, contending that clean energy alternatives align more with the state’s objectives to source 50% of its electricity from clean energy sources by 2030 (LA Times)