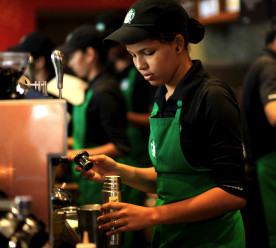 On Friday, President Trump signed an executive order barring immigrants from seven majority-Muslim countries for a minimum of 90 days, and suspending the US refugee program for 120 days. As a result, Starbucks has pledged to hire 10,000 refugees globally over the next five years. In an open letter to staff, chief executive Howard Schultz said the president’s order had caused “confusion, surprise and opposition”. Recruitment will begin in the US and focus on people who had served or supported the military. Silicon Valley heavyweights including Facebook, Google and Tesla have made public statements, while Airbnb is offering free accommodation to people affected by the travel restrictions and unable to get into the US. Mr Schultz, Chief Executive of Starbucks, said he wrote to employees with “deep concern, a heavy heart and a resolute promise” – adding he wanted them to know that the firm would “neither stand by, nor stand silent, as the uncertainty around the new administration’s actions grows with each passing day”. (BBC)

A flat-pack refugee shelter designed by Ikea has been crowned design of the year in the prestigious Beazley design competition. The ready-to-assemble shelter was created by the Swedish furniture giant in partnership with the United Nations High Commissioner for Refugees (UNHCR). It beat the new Tate Modern Switch House and the artwork on the cover David Bowie’s last album. It also swept the prize for 2016 architecture design of the year. The Beazley Design Awards recognise the most original and exciting designs from around the world in six different categories, which include architecture, digital, fashion, graphics, products and transport. The United Nations refugee agency and the not-for-profit Ikea Foundation joined forces to launch the Better Shelter Programme and created the structure in 2015 to “improve the lives of persons displaced by armed conflicts and natural disasters”. Professor of Design at Kingston University, Daniel Charny, who nominated the project, hailed the flat-pack object as a “ground-breaking example for putting values and benefit above profit”. (Independent)

BlackRock, Vanguard and State Street have expanded their corporate governance teams significantly in response to growing pressure from policymakers and clients to demonstrate they are policing the companies they invest in. The focus on corporate governance comes as regulators and politicians around the world increasingly scrutinise the relationship between companies and their shareholders. The British Prime Minister, Theresa May, launched a far-reaching consultation on reforming corporate governance in the UK last November, but is also considering whether to force large investors to disclose their voting records at companies’ annual general meetings. The EU’s shareholder rights directive, expected to come into force in 2019, is similarly expected to strengthen shareholders’ rights as well as to force large investors to reveal more information about how they engage with companies. The belief is that better governance analysis helps investors avoid companies that are on the brink of a costly scandal. (Financial Times)

World Bank accused of undermining its own climate change agenda

Programs including the introduction of new fossil fuel subsidies, weak policy support for renewables, the undermining of environmental regulations are just some of the ways in which the World Bank is accused of funding programs that are in sharp contrast to its fight against climate change and poverty reduction. The study, conducted by the Washington, D.C.-based NGO Bank Information Center (BIC) issued last week. Research was focused on Egypt, Indonesia, Mozambique and Peru. The World Bank’s Development Policy Operations completed its work largely by helping to fund private-public partnerships (PPPs) to launch programs that the private sector could not or would not finance alone. But BIC claims such PPPs were overwhelmingly fossil fuel projects, and even included coal investments in Indonesia and Mozambique. With this report, BIC tells the World Bank to put its money where its mouth is on sustainable development and to stop funding any projects that contribute to rather than mitigate climate change. Furthermore, the organization asked the global financial lender to establish a more robust framework, with greater transparency, as it evaluates potential energy projects in developing countries. (Triple Pundit)

Questions need to be asked about safety and protection of the environment, campaigners have said, after a leak in a North Sea well being drilled by the oil and gas firm Total. The company may be forced to temporarily abandon part of the well owing to a gas leak beneath the seabed, which has restricted access to the wellhead at its Elgin B platform. “Protecting staff and the marine environment should always be priority number one for the oil and gas industry”, said WWF Scotland director Lang Banks. “This is a worrying development, as this is the not the first time Total has had problems at its Elgin-Frankin field.” The company was fined a record £1.125m after one of the North Sea’s biggest gas leaks in 2012. The current leak occurred as workers drilled more than 4,000 metres (13,123ft) below the seabed. A Total spokesman said “The well remains under full control at the surface and the situation is under continuous review.” (Guardian)

Employees work inside the Starbucks at the Taj Mahal Palace hotel in south Mumbai, India at Wikipedia. Licensed under the Creative Commons Attribution 2.0 Generic license.