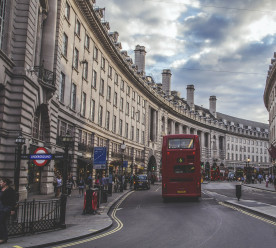 The Crown Estate recently published a second report into its novel approach to understanding the impacts of business beyond traditional financial indicators. First launched in 2013, ‘Total Contribution’ began as innovative approach to measuring and communicating the broader value the business creates through its activities, including those of its partners and customers. It has evolved to understand the impacts on business ‘capitals’, factors which a business draws upon to deliver its commercial performance and which are interrelated. The Crown Estate manages a £12bn property portfolio and has consistently outperformed the market over the last five years. Judith Everett, Chief Operating Officer at The Crown Estate said: “Total Contribution allows us to better understand the broader impact of our decisions on the capitals we rely on, enabling us to think bigger about how we create value and deliver a more resilient business over the long term.” (The Crown Estate)

Members of one of Latin America’s most well-known environmental organisations, Acción Ecológica, are fighting for their survival against a controversial attempt by Ecuador’s government to shut them down. The move by the government came six days after violence between soldiers, police and indigenous Shuar people opposed to a Chinese-run copper development, Panantza-San Carlos, and just two days after Acción Ecológica had called for a Truth Commission to be set up to investigate events there. The attempt to close the organisation has sparked severe criticism from UN human rights experts and outrage from numerous civil society organisations in Latin America and elsewhere. UN experts are calling on Ecuador to backtrack closing Acción Ecológica and to reform its legislation, noting that two other organizations, Pachamama and Union Nacional de Educadores, have been shut down in recent years. “It seems Ecuador’s government is systematically dissolving organisations when they become too vocal or challenge official orthodoxy”. (Guardian)

Child Slavery Claims Against Nestle, Cargill Get One More Chance

Six men forced into slavery as boys to harvest cocoa pods have a second chance to go after some of the world’s biggest chocolate companies in U.S. court, saying the companies should have known their suppliers used forced labor. They’re asking a federal judge in Los Angeles to allow their 12-year-old case to go ahead, even though their alleged captivity was in Ivory Coast. They say Nestle SA and Cargill Inc. employees in the U.S. knew of the forced labor but didn’t take steps to stop it, so they should be able to sue in an American court. Allowing the former slaves to sue in the U.S. over human rights abuses overseas would reverse years of precedents won by Chevron Corp., Coco-Cola Co. and other multinationals. If Nestle and Cargill can’t get the case thrown out, other companies might face a new wave of expensive, drawn-out lawsuits over suppliers’ alleged misdeeds. (Bloomberg)

UK retailers and manufacturers have generated an estimated £100m in food waste savings over a three-year period as part of WRAP’s Courtauld Commitment Phase 3, new figures released today (10 January) reveal. The Commitment was launched on behalf of all four UK Governments in early 2013 with the aim of reducing food and packaging waste by 3% across the manufacturing and retail sectors. Fresh data released by WRAP reveals that this target was achieved by the 53 signatories, which includes the ‘big four’ supermarkets, Coca-Cola Enterprises, Mondelez International and Nestlé, with 219,000 tonnes of waste  prevented and 555,000CO2e prevented over the Commitment’s lifetime. The data suggests that an extra 18,000 tonnes of surplus food and drink was redistributed for human consumption in 2015. WRAP’s business programmes director Steve Creed said: “The three phases of Courtauld have been a game-changer in bringing businesses together to work on issues of resource efficiency and drive change within their own operations. Today’s results show the industry’s commitment to reducing their environmental impacts and the huge benefit of collaborative action, particularly in the supply chain.” (Edie)

Ariad, a biotechnology company in Cambridge, Mass., has announced that it is being purchased by Takeda, the Japanese drug giant, for $5.2 billion. The $24 dollar-per-share purchase price represents a 75% premium to Ariad’s closing price on Friday. In October, Bernie Sanders tried to make Ariad Pharmaceuticals the latest pharmaceutical villain, tweeting that Ariad was an example of the drug industry’s “unbelievable” greed. A week later, he followed up with a letter, co-signed by Maryland Representative Elijah Cummings, asking Ariad to explain its “repeated and staggering price increases” in relation to the four price hikes which saw the price of drug treatment for patients with chronic myelogenous leukemia rise to $199,000 a year. However, Ariad has demonstrated that drug price increases can still pay off for companies and investors if they manage to weather the political storm. (Forbes)