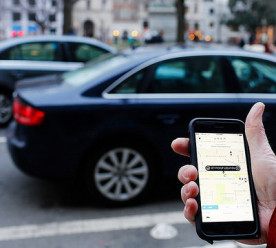 Uber drivers have won the right to be classed as workers rather than self-employed. The ruling by a London employment tribunal means the drivers will be entitled to holiday pay, paid rest breaks and the national minimum wage. The GMB union described the decision as a “monumental victory” for some 40,000 drivers in England and Wales, although Uber said it would appeal against the ruling that it had acted unlawfully. The ruling states that “Uber runs a transportation business”, adding: “The notion that Uber in London is a mosaic of 30,000 small businesses linked by a common ‘platform’ is to our mind faintly ridiculous.” Key considerations listed in the ruling include Uber’s “sole and absolute discretion” over bookings, the fact that Uber sets the fare for journeys, and the fact that Uber interviews and recruits drivers. (BBC)

Drivers for Uber in Boston cancelled rides for men with “black-sounding names” more than twice as often as for other men, according to a study published by researchers at MIT, Stanford and the University of Washington. Black people in Seattle faced notably longer wait times using Uber and Lyft than white customers. The researchers propose changes for Uber and Lyft to reduce discrimination, including not identifying passengers’ names, more severe repercussions for drivers who cancel, and periodic reviews of drivers’ behaviour. The news comes as Airbnb’s new “community commitment” comes into effect. All users will be required to agree to an anti-discrimination pledge in order to use the room-rental app. (Bloomberg; TriplePundit)

Asia Pulp and Paper parent company Sinar Mas is using smart mapping technology to enhance its capabilities in responding to and pre-empting forest fires. The Indonesian conglomerate’s new tool uses real-time data to identify the location of all forest fire hotspots within the last 24 hours, verify if they are from its properties, and evaluate what needs to be done to address them. In addition, the system also equips Sinar Mas’ firefighting team with actionable information that can help them pre-empt potential peatland fire. Prior to its roll-out, relevant forest fire and land surface data had to be obtained from multiple sources, which resulted in greater delays and longer lead times. (Eco-Business)

A consortium of European sustainable finance organisations has launched a plan to solve Europe’s investment crisis. The report launched by a consortium including ShareAction, WWF, ClientEarth, E3G and Eurosif, points out that the European Union has to massively accelerate investment to meet its climate and energy obligations. The consortium is calling on the European Commission to place a priority in its promised ‘refresh’ of the Capital Markets Union on boosting investment in low carbon infrastructure, enhancing responsible investment practices and improving the disclosure of climate risk information. Recommendations include ensuring Europe’s public finance programmes are fully aligned with the EU’s climate targets and developing the green bond market. (WWF)

Three hundred million of the world’s children live in areas with extreme air pollution, where toxic fumes are more than six times international guidelines, according to new research by Unicef. The study is the first to make a global estimate of exposure and indicates that almost 90 percent of the world’s children live in places where outdoor air pollution exceeds World Health Organisation limits. Unicef warned the levels of global air pollution contributed to 600,000 child deaths a year. Children are especially at risk, because they breathe more rapidly than adults and the cell layer in their lungs is more permeable to pollutant particles. In the report, Unicef urges all countries to cut air pollution by reducing fossil fuel burning in power plants and vehicles. (Guardian)

Image source: An UBER application is shown as cars drive by in Washington, DC. by Mark Warner / CC BY 2.0