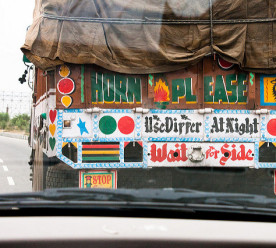 India’s largest truck manufacturer, Tata Motors, has partnered with Transport Corporation of India and communications agency Rediffusion for a pilot project to promote safe sex among truckers. Named “Dipper” condoms, in reference to the “Use Dipper at Night” sign painted on millions of Indian trucks, 45,000 have been sold at the cost of just three cents each at specific health centres for truckers. They are sold by outreach workers who also explain the risks of unprotected sex. Long-distance truckers, along with migrant workers, are considered “bridge populations” for HIV in India. The prevalence of HIV among truckers was 2.59% in 2011, compared to 0.26% in the general population. (The Wall Street Journal)

Mitsubishi, the Japanese automotive manufacturer, has ventured into the US solar market with a move to take a ‘near majority’ stake in Boston-based solar developer Nexamp. In a statement, the company cited US government support for clean energy rollout as a driver for the move. The closure of coal-fired power stations under stricter environmental regulations, the emphasis on large renewable energy power plants and government incentives for rooftop solar were all highlighted as changes that have made the US an attractive solar market. The statement goes on to state Mitsubishi’s intentions to “continue to pursue new business models in keeping with the changes taking place in the business environment”. (Business Green)

Go Ultra Low, a joint UK government and car industry campaign for the promotion of electric driving, has announced that over sixty public and private sector organisations have now committed to make at least 5% of their fleets electric by 2020. Many organisations have pledged to go significantly further than this goal. Britvic is planning to ensure that 10% of its vehicles are electric by 2020, and the University of Cambridge is aiming for a 20% share for its fleet.  Making the switch to electric vehicles not only reduces emissions but also enables fuel and tax savings for participatory organisations. Poppy Welch, head of Go Ultra Low, said that with improvement in the quality and quantity of electric vehicles, more organisations and fleets should consider switching to electric. (Business Green)

South Korean electrical manufacturing company Samsung has denied allegations that it has withheld crucial information from employees about the chemical exposure they are subject to at its South Korean factories. An investigation by the Associated Press news agency found that a group of workers’ families claim there have been over 200 cases of employees contracting serious illnesses, such as cancer, and 76 deaths due to contact with the chemicals. Under South Korean law, companies are not required to provide information deemed a trade secret. The company firmly denies the accusations and has stated that the safety of its workers is its “number one priority”. (BBC News)

Chinese energy company China General Nuclear Power (CGN) has been charged with nuclear espionage in the US. According to a seventeen-page indictment, a company employee was attempting to enlist US-based nuclear experts to provide assistance in developing nuclear material in China, without registering as an agent of a foreign nation. Conspiring to unlawfully engage and participate in the development of nuclear material outside of the US carries a maximum sentence of life in prison and a fine of $250,000. CGN has a 33% stake in the UK’s controversial proposed nuclear power facility Hinkley Point, which Prime Minister Theresa May recently delayed in part because of concerns over China’s involvement. (The Guardian)