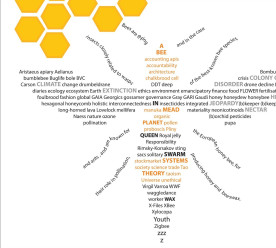 The Business of Bees: an integrated approach to bee decline and corporate responsibility

Jill Atkins and Barry Atkins explore the problem of bee decline, and the role of corporate responsibility and governance as they relate to this critical issue.

However we look at the situation and the multitude of competing and possible causes of bee decline, they all seem to have a common root cause: humans and human activity. Even threats to bees arising from diseases and natural predators/parasites seem to be exacerbated by human activity.

The human race has had, in the space of a very short time (in terms of geological time and the history of the planet), an overwhelming impact on the climate, global temperatures, habitats and consequently biodiversity. There seems to be no question in our minds that bee decline is a direct result of human behaviour and activity, especially the activities of business and multinational corporations.

Bees have been identified as a critical species within our ecosystem, providing an ecosystem service through pollination, as well as honey production, without which world food production would become extremely problematic.

The United Nations’ Food and Agriculture Organization has highlighted reports of pollinator decline in at least one region or country on every continent (except Antarctica). Reasons for this loss of pollinators are thought to include habitat decline, pesticide use and the spread of disease. The situation for bees is critical, with some species listed as endangered and at risk of extinction. Colony collapse disorder (CCD), where bee colonies disappear suddenly, has become a serious problem in countries across the world.

Ultimately, no pollinators mean no pollination, which means no crops and no food. Not all food is produced via insect pollination but a large amount is, as we shall see in discussions throughout this book. Certain species would be particularly affected by declining pollinator populations, namely sensitive plants including: apples, cocoa beans, coffee and almonds. Losing these types of fruits and nuts is now thought to pose a serious risk to human health, given the potential deterioration in our varied diets. It would also be an unpleasant prospect for most to lose something as dearly loved as chocolate and coffee!

There are many estimates of the financial impact of losing pollinators, going back several decades. In the UK, in 2007 the National Audit Office (NAO) concluded from collating research that the value of bees’ pollinating “services” to the UK economy was approximately £200 million a year. In 2013, Greenpeace quoted research which estimated the global economic benefit of pollination as around $265 billion, based on the value of crops dependent on natural pollination. However, this estimate, and all the other approximations discussed here, does not take into account the fact that it would be practically impossible to replace natural pollination and the cost would be unimaginably high.

Whichever study we look at, the figures differ but the fact remains that they are very large. They also grossly underestimate the costs of trying to “replace” natural pollination. Furthermore, they do not make the slightest attempt to account for what we would term “intrinsic value”, i.e. the value of bees per se, as creatures on the planet, and their role in the wider ecological system. How can we possibly “value” in monetary terms, the loss of a species? From a business point of view, it is important to attempt estimates of the value of bee decline in order to appreciate why loss of bees is important for food production, for food retailing, for food security, for business profits and for investors. However, the business chain does not even begin to assess the impact of bee loss on people’s diet and ultimately survival as well as on the ecosystem as a whole.

Clearly, food security and nutrition are key areas where bees and other pollinators play a vital role. Food producers and food retailers involved in the supply chains underlying food production between plants and their final destination—the “meal on the plate”—are engaged worldwide in initiatives aimed at saving and nurturing bee populations. The studies of corporate accounts within this book provide a rich and varied source of information about the many, many projects and initiatives with which companies are involved globally to save bees, both wild bee populations and commercial bees.

Companies involved in producing luxury products such as perfumes are also extremely concerned about bee decline and are involved in many different projects internationally with the sole aim of enhancing bee populations. In a completely different field, architecture is a salient example of a profession that is involved in enhancing bee populations. Architectural companies and real estate businesses in Sweden are making huge strides to provide new urban habitats for bees.

The delicate balance between species in the natural world is crucial to survival. If human society continues “business as usual” and certainly “bees’ business as usual” then not only bees and other species, but also humans themselves could be heading for extinction. Drastic action is required. Is it too late to prevent further global warming and to counteract climate change? These are questions in minds worldwide. Is it too late to address the decline in bee populations and populations of other essential pollinators? It seems increasingly likely that if bees continue to disappear then human populations will also perish. If we put bees first, they will thrive – and so will we.”

The Business of Bees is published by Greenleaf Publishing. Featuring investor perspectives from Schroders and Aviva UK, and reviews of corporate reporting and accountability from Japan, the US, South Africa and Sweden, the book examines what the impact will be on consumers, companies, stock markets and ultimately on global society if bee populations continue to decline at a dangerous rate.

Readers can find out more, and enjoy a discount of 20% on the list price of the book by using the promotional code “BEE20” on Greenleaf’s website: http://www.greenleaf-publishing.com/the-business-of-bees