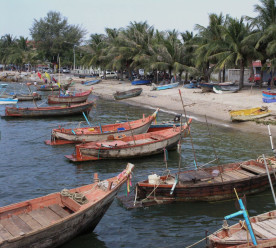 More than 100 people have been arrested in a crackdown on abuses in Thailand’s multi-billion dollar seafood industry, officials say. Last April the European Union threatened to boycott the industry unless it tackled illegal fishing and allegations of human trafficking. On Monday, police said a taskforce set up since had investigated 36 cases and also rescued 130 trafficking victims. Thailand is the world’s third largest exporter of seafood. Human rights groups have long highlighted abuses in the Thai industry, saying it is reliant on illegal fishing practices and overfishing, and involves trafficked workers from neighbouring countries who, they say, work in conditions akin to slavery. Last November, Nestlé revealed that it had discovered evidence of slave-like conditions in parts of its Thai supply chain. The Thai government, desperate to improve its ranking in the US annual trafficking report and to avoid an EU ban, seems willing to act. (BBC)

Facebook is banning private sales of guns on its flagship social network and its Instagram photo-sharing service, a move meant to clamp down on unlicensed gun transactions. Facebook already prohibits people from offering marijuana, pharmaceuticals and illegal drugs for sale, and the company said on Friday that it was updating its policy to include private, person-to-person sales of guns. In January, President Obama gave a speech promising to tighten enforcement of laws governing unlicensed gun sales. In response, some individual sellers said they would turn to sites like Facebook. Facebook said it would rely on its vast network of users to report any violations of the new rules, and would remove any post that violated the policy. If the company believed someone’s life was in danger, Facebook would work with law enforcement on the situation. (New York Times)

British Columbia’s Great Bear Rainforest has been largely protected from logging in a landmark agreement between aboriginals, forest companies, environmental groups and the provincial government. The land-sharing deal, 20 years in the making, will protect 85 percent of the world’s largest intact temperate rainforest, located about 700 kilometres northwest of Vancouver. 95 percent of the area was open to logging 20 years ago, but protests, blockades and ensuing negotiations resulted in Monday’s agreement that ensures most of the forests will not be logged. Environmental campaigners say the deal is a model for resolving similar land-use disputes around the world. The forest is inhabited by the spirit bear, a rare sub-species of the black bear with white fur, and is also home to 26 aboriginal groups. (New York Times)

The UK’s Environment Agency has revealed that 5,948 firms are now compliant with the government’s new Energy Savings Opportunities Scheme (ESOS), after a last-minute rush before the final January 29 deadline. A further 1,000 have notified the Agency that they intend to comply in the coming weeks. Some 10,000 firms are expected to fall under the ESOS scheme, which requires businesses with more than 250 employees, £ 40 million in annual turnover or a balance sheet of more than £ 34 million to complete an officially approved energy efficiency audit every four years. Despite the late surge ahead of last week’s deadline, the figures suggest there are more than 3,000 companies that are yet to comply with the scheme. Firms that are not compliant risk hefty fines, as well as the lost opportunity to reap financial rewards from energy savings. (Business Green)

Airline easyJet has unveiled plans to use hydrogen fuel cells on its aircraft to save up to 50,000 tonnes of fuel a year and cut its carbon emissions. The airline hopes to trial technology later this year that would allow planes to taxi to and from the runway using zero-emissions fuel. Around four percent of easyJet’s total fuel consumption is used in taxiing, or an average of 20 minutes a flight. EasyJet’s “hybrid plane” would use a hydrogen fuel cell stowed in the aircraft’s hold, which would capture energy generated by brakes on landing and could charge the system’s lightweight batteries on the ground – a similar system to one developed in Formula 1 cars. EasyJet has targeted a seven percent cut in its CO2 emissions (currently 81 grams a passenger kilometre) by 2020, and claims its relatively young fleet and full planes already mean its passengers have a significantly lower carbon footprint than traditional, full-service airlines. (Guardian)

Image Source: Thai fishing boats at the beach at Bang Sen by SeaDave / CC BY 2.0