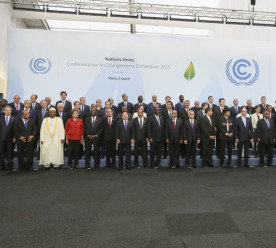 COP21: Paris climate deal is ‘best chance to save planet’

The climate deal reached in Paris is “the best chance we have to save the one planet we have”, US President Barack Obama has said. He said it could be a “turning point” towards a low-carbon future. The Paris pact aims to keep global temperature increase “well below” 2°C, and to pursue efforts to limit it to 1.5°C – a more ambitious goal than had been expected. The deal – which is partly legally binding and partly voluntary – was agreed after two weeks of tense negotiations involving nearly 200 countries. In his closing speech to delegates, UN Secretary-General Ban Ki-moon said, “In the face of an unprecedented challenge, you have demonstrated unprecedented leadership… This is a resounding success for multilateralism.”

Highlighting the role of the private sector, Mr Ban said business leaders came to Paris in unprecedented numbers and that “powerful” climate solutions are already available while many more are to come. Christiana Figueres, executive secretary of the UNFCCC, also praised the private sector: “The recognition of actions by businesses, investors, cities and regions is one of the key outcomes of COP 21… The groundswell of action shows that the world is on an inevitable path toward a properly sustainable, low-carbon world.” According to The Economist, “Perhaps the most significant effect of the Paris agreement in the next few years will be the signal it sends to investors: the united governments of the world say that the age of fossil fuels has started drawing to a close”.

But some campaigners said it did not go far enough to protect the planet. They said the agreement would still condemn hundreds of millions of people living in low-lying coastal areas and small islands, after US negotiators demanded the exclusion of language that could allow the agreement to be used to claim legal liability for climate change. Oxfam Executive Director Helen Szoke said: “This deal offers a frayed life-line to the world’s poorest and most vulnerable people. Only the vague promise of a new future climate funding target has been made, while the deal does not force countries to cut emissions fast enough to forestall a climate change catastrophe.” (BBC; UN; UNFCCC; Economist; Guardian; Oxfam)

To achieve ambitious global development goals, employment must be harnessed, imbalances based on gender and skills must be addressed, and greater emphasis must be placed on employment-led growth, according to a UN report. “Work is the defining issue of our time… the world of work is changing very fast because of globalisation and the digital revolution, and these are creating opportunities as well as risks.,” said Selim Jahan, director of the UN’s human development report office. The report paints a stark picture of persistent inequality between the richest and the poorest, and between men and women. It warns that the increasingly informal nature of many jobs means more must be done to safeguard workers’ rights, benefits and dignity, and to ensure employment contributes to development. It says that with an estimated 204 million people unemployed worldwide, and 830 million working but still living on less than $2 a day, human potential is being wasted. (Guardian)

NHS hooks up with dating app Tinder on organ donations

The NHS, UK’s health care body, has partnered with dating app Tinder to raise awareness about organ donations. The app is used to find people a good personality match but for the next fortnight it will also encourage users to become a donor. In order to encourage more young people to join the register, Tinder has created bespoke profiles for some of its more high-profile members, including Olympic gold medallist Jade Jones MBE, and TV stars Gemma Oaten and Jamie Laing. Users who swipe right will match with these profiles and receive a message that says: “If only it was that easy for those in need of a life-saving organ to find a match.” In July, NHS Blood and Transplant reported that the number of people in the UK donating organs after death had fallen for the first time in more than a decade. (BBC)

The drug giant Reckitt Benckiser has been ordered to pull some of its popular Nurofen painkiller brands off shelves in Australia after a court ruled it had made misleading claims. The company has admitted to selling identical products that were marketed to treat specific types of pain, and for almost double the price of its standard painkiller. The Australian federal court has ruled that the multinational misled consumers after Nurofen’s varieties for back pain, period pain, migraine pain and tension headaches were all found to contain the same active ingredient. The consumer watchdog launched the court action against the UK-based pharmaceutical company earlier this year. The chairman of the Australian Competition and Consumer Commission, Rod Sims, said any representations which were difficult for a consumer to test would in future face greater scrutiny. (Guardian)