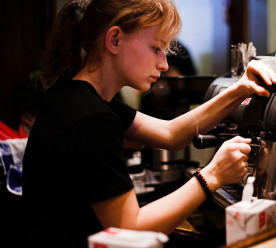 Spearheaded by Starbucks and its chief executive, Howard Schultz, nearly 20 big American corporations have unveiled a plan to find jobs for 100,000 unemployed young people in the US over the next three years. The “100,000 opportunities initiative” aims to hire 100,000 16- to 24-year-olds “who face systemic barriers to jobs and education” by 2018. It will kick off in August, at a job fair in Chicago. Starbucks is joined by 16 companies including Alaska Airlines, CVS Health, Hilton, Microsoft, Taco Bell, Target and Walmart. The announcement comes on the heels of Starbucks’s own recent “opportunity youth” commitment to hiring 10,000 16- to 24-year-olds over the next three years – a small crack at the 5.6 million youths who have dropped out of school and who are without jobs in the US. (Fast Company; New York Times)

The UK government is to press ahead with plans to force large firms to disclose data on the gender pay gap among staff, with a consultation to begin on Tuesday. UK Prime Minister David Cameron will say the move will “pressure” firms into boosting women’s wages, as he vows to eliminate the gender pay gap “within a generation”. In November last year, Office for National Statistics figures suggested that the gender pay gap was at its narrowest since comparative records began in 1997. The difference was 9.4% in April compared with 10% a year earlier. Anne Francke, of the Chartered Management Institute, told the BBC the attempt to eliminate the pay gap was a “great, bold step” but warned that specific targets, not a blanket target, were needed. (BBC)

China’s green building industry is exploding, with green building space growing 154 times since 2008 and taking the lead from the US in terms of gross floor area, according to a new research report from global real estate services company CBRE. The New Era of Green Buildings in China found that as of January 2015, China had 2,538 projects with the country’s Green Building Evaluation Standard certification, as well as 627 LEED-certified projects. While China began relatively late in the green building space, the report says the size of the Chinese construction industry (the largest in the world) means there is significant room for growth. With increasing concern over environmental issues a strong pressure point, and a government commitment to reform the economy, further strong green building action is expected. (Eco-Business)

Climate change should be treated with the same gravity as the threat of nuclear war, a major new report commissioned by the UK Foreign Office has warned. The report, Climate change: A risk assessment, warns policy-makers of the catastrophic effects of the worst-case scenarios of climate change. The report was produced by the Centre for Science and Policy (CSaP) at the University of Cambridge. The report authors, led by UK climate envoy Sir David King, said the systemic risks of climate change included spiralling crop failures leading to a tripling of food prices and widespread shortages. Extreme water stress and competition for productive land could also become a source of conflict, warned the report, while migration could start to take place on a “historically unprecedented scale”. (Edie)

On Thursday last week, so much power was produced by Denmark’s wind farms that the country was able to meet its domestic electricity demand and export power to Norway, Germany and Sweden. “It shows that a world powered 100% by renewable energy is no fantasy,” said Oliver Joy, a spokesman for trade body the European Wind Energy Association. “Wind energy and renewables can be a solution to decarbonisation – and also security of supply at times of high demand.” The figures emerged on the website of the Danish transmission systems operator, energinet.dk, which provides a minute-by-minute account of renewable power in the national grid. A surge in windfarm installations means Denmark could be producing half of its electricity from renewable sources well before a target date of 2020. (The Guardian)