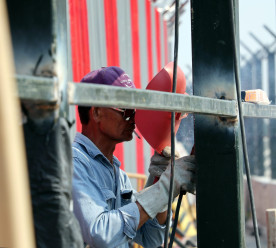 Indian workers in factories supplying the supermarket chains Marks & Spencer, Tesco and Sainsbury’s, and the fashion brand Ralph Lauren, have told reporters they are being subjected to exploitative conditions. Women working at a Ralph Lauren supplier said they had been forced to stay overnight to complete orders, sometimes requiring them to sleep on the factory floor. Workers at the supermarket suppliers said they had been made to endure conditions which would be unacceptable for staff employed by the same brands in the UK. These allegations come as a report by the Corporate Human Rights Benchmark from the World Benchmarking Alliance revealed that of 229 of the world’s largest companies, almost half are unable to prove they are protecting human rights in line with the UN’s requirements. (BBC; edie)

Commitments to end forest destruction across palm oil supply chains remain unfulfilled ten years after they were made, with companies failing to report on how they are monitoring their own and their suppliers’ operations. The analysis, conducted by international conservation group Zoological Society of London, finds that while 71 percent of the companies surveyed have made clear zero-deforestation vows, just 42 percent disclose how they ensure compliance in their operations. Furthermore, only 10 percent comprehensively report on how they are preventing forest destruction across their supply chains. The report urges the palm oil industry to ramp up reporting on their forest conservation efforts and take greater responsibility in tackling climate change and biodiversity loss. (Eco-Business)

Amazon CEO Jeff Bezos has revealed that the World Wildlife Fund, World Resources Institute and Environmental Defense Fund are among those to secure six figure donations from his $791 million funding round for the ‘Earth Fund’. Bezos emphasised that the $791 million tranche of funding was “just the beginning” of the Earth Fund’s $10 billion commitment. The Earth Fund, launched in February, aims to tackle climate change by diverting a portion of Bezos’ wealth to scientists, activists, and other organisations engaged in efforts to “preserve and protect the natural world”. The funding is being distributed alongside Amazon’s Climate Pledge initiative, which has seen the tech giant commit to net zero emissions by 2040 while mobilising record investments in clean technologies. (Business Green)

Ten US-based digital rights and racial justice groups have urged President-elect Joe Biden to move fast to protect digital rights by curbing the use of facial recognition and surveillance, regulating big tech and tackling discrimination perpetuated by algorithms. The groups signed a statement setting out their policy proposals for his first 100 days in office. It urges Biden to institute a federal ban or moratorium on facial recognition technology on his first day in office and to create an independent Data Protection Authority, and back a federal privacy law, among other reforms. Jane Chung an advocate from the Public Citizen group noted that there is a “real opportunity for the administration to lead on these issues”. (Thomson Reuters Foundation)

The New Economics Foundation thinktank and Positive Money campaign group have urged for reforms of the Bank of England to help decarbonise the financial system. The group called for urgent changes to its mandate and to give the Bank of England more powers to cut carbon emissions and help Britain meet its net zero carbon emissions target. This comes after chancellor Rishi Sunak’s announcement that large companies and financial institutions would be forced to come clean about their exposure to climate risks within five years. However, the campaigners warn that these steps leave too much to financial markets to self-regulate. (The Guardian)