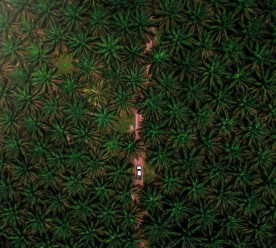 Food and beverage businesses in Singapore that use sustainable palm oil are being asked to carry signage indicating they are “haze-free”, as part of a new campaign called “Haze-Free Foodstand” by local green group People’s Movement to Stop Haze. The campaign aims to encourage Singapore’s many eateries to promote their use of sustainable palm oil. The haze is an annual problem in Southeast Asia, caused by slash-and-burn forestry in Indonesia to prepare land for palm oil plantations. Ten establishments have joined the programme so far, including Little Cake Boy, Chicas, and Huff n Puffs. Though the use of sustainable palm oil is increasing, businesses are often reluctant to communicate their use of palm oil to consumers, even if it is sustainably grown, because of the crop’s poor reputation. (Eco-Business)

The UK Health Alliance on Climate Change (UKHACC) has called for a climate tax to be imposed on food with a heavy environmental impact by 2025, unless the industry takes voluntary action on the impact of their products. The coalition includes 10 Royal Colleges of medicine and nursing, the British Medical Association and the Lancet, representing doctors, nurses and other health professionals. UKHACC’s report recommends ending buy-one-get-one-free offers for food that is bad for health and the environment, and for perishable foods that are often wasted. It also calls for public information campaigns on diet to include climate messages, for labels on food to reveal its environmental impact, and for the £2bn spent every year on catering in schools, hospitals, care homes and prisons to meet minimum environmental standards. (The Guardian)

China’s policy of planting trees is likely playing a significant role in tempering its climate impacts, according to research in science journal Nature. Researchers have identified two areas in China where the scale of carbon dioxide absorption by new forests has been underestimated. Taken together, these areas account for over 35% of China’s entire land carbon “sink”, the group says. China is the world’s biggest source of human-produced carbon dioxide, responsible for around 28% of global emissions. Billions of trees have been planted in China in recent decades, to tackle desertification and soil loss, and to establish vibrant timber and paper industries. The new study – using forestry records, satellite remote-sensing measurements and observations of CO2 – refines estimates for how much CO2 all these extra trees could be taking up as they grow. (BBC)

The world’s largest consumer goods groups are making slow progress on increasing the recycled plastic in their packaging, despite signing up to targets that aim for significant progress by 2025. Companies including Mars, Mondelez and Keurig Dr Pepper reported less than 1% of their plastic packaging was made from materials recycled from consumer use in 2019, despite agreeing to achieving 5-30% by 2025 under a joint initiative run by the Ellen MacArthur Foundation and the UN Environment Programme. SC Johnson and Danone made better progress and Unilever increased its use of recycled material from 1% in 2018 to 5% in 2019. The foundation warned that many companies taking part in the initiative so far showed only piecemeal attempts to rethink models dependent on single-use plastics, such as investing in reuse. (Financial Times)*

Technology giant Google has achieved one of its plastics targets ahead of schedule, revealing that all new Pixel phones and Nest thermostats include recycled content. Last year, it pledged to incorporate recycled plastics content into all of its hardware lines by 2022. It unveiled the designs for its new Pixel and Nest range this week, confirming that all new products are designed with recycled materials. All Nest thermostats include 75% recycled plastics from post-consumer feedstocks, and the new Nest Audio includes 70%. The proportion and origin of recycled plastic content for the new Pixel 5 smartphone has not been disclosed. However, Google claims it is the first phone to be manufactured with 100% recycled aluminium, claiming that recycled aluminium’s carbon footprint is 35% lower than virgin aluminium.  (Edie)