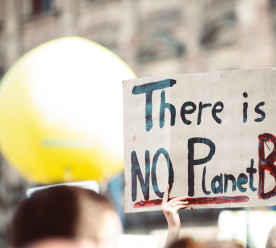 Investment giant BlackRock backed fewer environmental votes at annual meetings this year than last, despite chief executive Larry Fink’s warning in January that climate change represented a risk to markets unlike any previous crisis. BlackRock supported just 6% of environmental proposals filed by shareholders globally in the 12 months to June, down from 8% in the previous year, according to figures from data provider Proxy Insight. Rivals JPMorgan backed 38% of environmental resolutions globally this year, up from 10% previously and Wellington Management Company supported almost 42%. Mark van Baal, founder of FollowThis, a group that files resolutions at oil companies, criticised BlackRock for not backing more climate proposals at annual meetings. “As a shareholder, voting and divestment are the only ways to make your request evidently visible, everything else is just talk,” he said. (Financial Times)*

German supermarket chain Aldi has announced that it will remove single-use plastic bags from the produce aisles in all of its UK & Ireland stores by the end of 2020. Aldi currently distributes over 100 tonnes of single-use plastic produce bags in the UK and Ireland annually. Instead of replacing the bags with single-use alternatives made from other materials, as brands such as Tesco and Sainsbury’s are doing, Aldi will encourage shoppers to bring their own reusable bags or containers. Customers without reusables will have the option to buy reusable drawstring produce bags for 25p each. Aldi first trialled these bags, which are made using recycled plastic, in 250 stores last winter and despite trials being scaled back to 100 stores this year due to Covid-19, were ultimately proved successful. (Edie)*

Food firms in the UK, including McDonald’s, Unilever, Lidl, Nando’s, Nestle, Tesco, Greencore and Pilgrim’s Pride, have written a letter urging the government to create tougher rules to protect rainforests. Ministers are planning a new law forbidding large firms to use produce from illegally deforested land. In response, the firms have written a letter to the government on the closing day of its consultation on forest protection. It says: “Restricting action to illegal deforestation would not achieve halting the loss of natural ecosystems, especially when governments have discretion to decide what is legal.” Food firms say the law should apply to all deforestation, whether it’s legal or illegal, and it should also include smaller-sized firms to prevent competitive advantage being made by large-scale imports of commodities from previously forested land. (BBC)

Online abuse is driving girls to quit social media platforms including Facebook, Instagram and Twitter, with nearly 60% experiencing harassment, a global study by girls’ rights group Plan International showed. One in five girls and young women have abandoned or reduced their use of a social media platform after being targeted. Attacks were most common on Facebook, where 39% of girls polled said they had been harassed, followed by Instagram (23%), WhatsApp (14%), Snapchat (10%), Twitter (9%) and TikTok (6%). The study found reporting tools ineffective in stopping the abuse, which included explicit messages, pornographic photos and cyberstalking. The charity called on social media companies to take urgent action to address the issue and urged governments to pass laws to deal with online harassment. (Thomson Reuters Foundation)

Italian energy company Enel plans to team up with Chilean power company AME and others to install a pilot project to produce green hydrogen in Chile. The plant, which is expected to be commissioned in 2022, will be the first green hydrogen plant of its kind in the country and one of the biggest in Latin America. Enel said the Chile plant would be driven by wind power. Other prospective partners include Chilean oil company ENAP, Siemens Energy and Porsche. Green hydrogen is produced from renewable energy sources using devices called electrolysers. Enel, one of the world’s biggest renewable energy companies, is looking to launch a new green hydrogen business to speed up plans to be a carbon-free power producer by 2050. (Reuters)