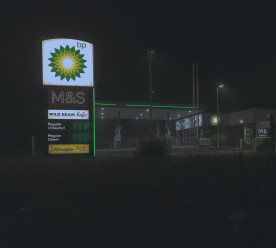 UK energy major BP has warned of a peak in oil demand within the next few years, signalling that the coronavirus pandemic is ushering in an earlier than anticipated decline for the fossil fuel era. The company modelled three scenarios for the world’s transition to cleaner fuels that all see oil demand falling over the next 30 years. The new analysis marks a dramatic change from last year when BP’s base case expected consumption to grow over the next decade reaching a peak in the 2030s. While oil demand is not expected to collapse, a plateau or decline in consumption would fundamentally alter the outlook for investment in the industry and the willingness of shareholders to keep funding new projects. Increasing efficiency and electrification of road transportation is one of the main drivers of a peaking in oil demand. (Financial Times) *

The fashion industry has been accused of being “blind” to the risks of water pollution by a new report from investor-backed environmental disclosure platform CDP. The research, which has been released today in the run up to this year’s London Fashion Week, reveals that only 10 per cent of listed fashion firms have demonstrated awareness of their impact on water pollution levels. CDP said the fashion and textile industry is responsible for substantial levels of water pollution at each stage of the supply chain, from agricultural runoff in cotton fields to the toxic chemicals used during the dying process and the microfibres that can be released when clothes are washed. Yet, of 136 businesses whose investors requested impact assessments on water pollution, only 62 – or 46 per cent – provided data in 2019. Of these, only seven – including Gap Inc, H&M, and luxury goods brand Kering – demonstrated awareness of water pollution across their entire value chain. (Business Green)

Climate Action 100+, a leading investor group, has written to the boards of the world’s largest corporate emitters of greenhouse gases, warning they must produce a strategy to move their business to net-zero carbon emissions or face pressure at future AGMs. The group includes most of the world’s biggest investors, collectively managing $47 trillion in assets. The group called on the companies to create strategies that covered their full value chain – including Scope 3 emissions from each company’s products – and were science-based. Companies also needed to set medium-term objectives and material targets to help demonstrate the longer-term goals were achievable. To compare the relative merits of each company’s strategy the group is launching a new benchmark to help its 500 members and others assess each company’s progress on the way to net-zero against a set of 30 indicators. (Reuters)

A big chunk of ice has broken away from the Arctic’s largest remaining ice shelf – 79N, or Nioghalvfjerdsfjorden – in north-east Greenland. The ejected section covers about 110 square km, which satellite imagery shows has shattered into many small pieces. The atmosphere in this region has warmed by about 3C since 1980. Nioghalvfjerdsfjorden is roughly 80km long by 20km wide and is the floating front end of the Northeast Greenland Ice Stream – where it flows off the land into the ocean to become buoyant. July witnessed another large ice shelf structure in the Arctic lose significant area. This was Milne Ice Shelf on the northern margin of Canada’s Ellesmere Island. Eighty sq km broke free from Milne, leaving a still secure segment just 106 sq km in size. Milne was the largest intact remnant from a wider shelf feature that covered 8,600 sq km at the start of the 20th Century.  (BBC)

Some 200 critically endangered golden frogs are living a sheltered existence in Panama, protected from a devastating fungus that threatens to wipe out a third of the country’s amphibian species—a situation scientists describe as “critical”. Though endemic to the Central American country, no Panamanian golden frog can be seen in its natural habitat, threatened as it is by a so-called “superfungus” that has decimated amphibians in the wild. The pathogen is responsible for chytridiomycosis, an infectious disease that scientists say has already caused the disappearance of some 30 species. Despite the gloomy scenario, scientists point to some glimmers of hope, saying that in the past few years some species believed to have gone extinct have been re-discovered. Believed extinct in the wild, only about 1,500 of the tiny Panamanian golden frogs are found in zoos where they can reproduce. (Phys)