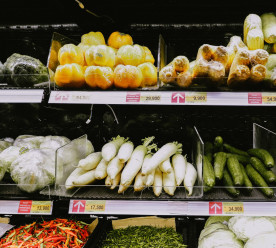 Technologies that can remove carbon dioxide from the air could have huge implications for future food prices, according to new research. According to the report, food crop prices could rise more than five-fold in some parts of the world as a result of carbon capture and storage technologies impacting energy, water and land use. Scientists have said that such machines that remove CO2 from the air will be needed to keep the rise in global temperatures in check. One of the technologies is bioenergy with carbon capture and storage (BECCS), which involves growing crops that soak up CO2, then burning them for electricity while capturing and burying the carbon that’s produced. Critics say this idea would need the deployment of huge amounts of land which would reduce the amount of land for agriculture at a time of increasing global population. The research finds that the worst affected areas would be in sub-Saharan Africa which could see prices rise by 5-600% by 2050. (BBC)

Consumer goods giant Unilever has announced it is to invest €1bn in measures that could allow it to eliminate fossil fuels from its cleaning and laundry products by the end of the decade. The company intends to transition the products across its cleaning brands – which include Persil, Sunlight, Domestos and Cif – away from chemicals made from fossil fuel feedstocks and replace them with renewable or recycled sources of carbon. Unilever said the €1bn of funding will specifically finance biotechnology research, CO2 utilisation technologies, low carbon chemistry research, and biodegradable and water-efficient product formulations, while also helping the firm halve its use of virgin plastic by 2025. The chemicals in Unilever’s cleaning and laundry products make up the greatest proportion of the company’s carbon footprint, accounting for roughly 46 per cent of its emissions. The firm expects its new programme to reduce the carbon footprint of its product formulations by a fifth. (Business Green)

Vegan milk brand Oatly is facing protests by climate and political activists after the decision to sell a stake in the company to a consortium that includes Blackstone, a powerful private equity firm headed by Trump donor Stephen Schwartzman. The $200m deal for the Swedish oat milk brand, favoured by many vegans and non-dairy drinkers and considered one of the most sustainable non-dairy milk brands, was agreed in July. Blackstone has previously been targeted for investments in Hidrovias, a Brazilian infrastructure company, which has previously been accused of having links to deforestation in the Amazon rainforest. Oatly has now been placed in the position of defending the deal. In a statement posted on Twitter, the company said Blackstone may be an “unexpected choice”, but the investment “will help us expand our sustainable mission and create more plant-based products”. (The Guardian)

British supermarkets will be banned from selling beef, soy and other key commodities sourced from illegally deforested land, under new government plans. Large businesses operating in the UK will have to show that commodities including soy, cocoa and palm oil, sourced in their supply chains complied with local environmental laws when being produced. The proposals were first made earlier this year by a panel of business leaders led by Sir Ian Cheshire that was commissioned by Defra to examine how the UK can improve its land-use strategy. As the host of the next United Nations global climate summit, known as COP26, the UK is also seeking to show environmental leadership in the international arena. The policy may pile further pressure on the Brazilian government, which has  already faced calls from institutional investors managing about US$3.7 trillion to abandon a proposal they say will add to deforestation and violate the rights of indigenous groups in the Amazon. (Business Times)

Microplastic pollution causes significant damage to populations of soil-dwelling mites, larvae and other tiny creatures that maintain the fertility of the land, research has found. The study, published in the Proceedings of the Royal Society, notes that discarded bags, cups, threads and other forms of plastic waste are concentrated more in the earth than the oceans, with similarly dire consequences for the abundance of species that live below the surface. The scientists divided a plot of subtropical land in Jinfoshan, Chongqing in China into six blocks, each containing four test areas. After leaving the plastic to seep into the soil for 287 days, the researcher collected five samples and counted the species found inside. At the highest level of plastic contamination, they found a significant decrease of the most common species. (The Guardian)