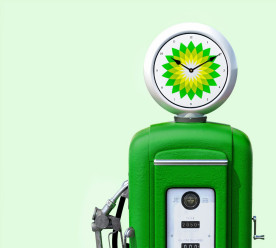 Oil giant BP has elaborated its plan to become a net zero company by 2050 with a commitment to cut the oil and gas it produces by 40 percent and increase annual investment in low carbon technologies 10-fold by the end of the decade. In a wide-ranging update, the company outlined its plan to transition from an oil and gas provider to an “integrated energy company” in the wake of the pandemic that has resulted in multi-billion-pound losses at the oil company. Building on its announcement earlier this year of a new net zero emissions target, BP said it would increase annual expenditure on ‘low carbon investments’ such as clean electricity, bioenergy, hydrogen, carbon capture and storage and mobility to $5 billion by 2030, up from around $500 million today. Crucially, it also committed to reducing its oil and gas production by 40 percent, a move that would help the firm meet a goal of reducing emissions from upstream oil and gas production by 35 percent by the end of the decade. (Business Green)

Popular messaging service WhatsApp has stepped up the fight against disinformation and fake news by rolling out a new feature to allow users to check the contents of viral messages. The fact-check feature will appear as a magnifying glass icon next to messages that have been forwarded through five or more people. Tapping on the icon will allow users to upload the message onto their Web browser to perform Google searches for related news, so users can do their fact-checking without WhatsApp ever seeing the message itself. For instance, a screenshot on the WhatsApp blog shows that the feature will allow a message containing the claim that “drinking fresh boiled garlic water will cure Covid-19” to bring up three fact-checking websites stating that it is false. The feature will be rolled out as a pilot initially in seven countries: Brazil, Italy, Ireland, Mexico, Spain, Britain and the United States. Users need to download the latest version of the app to access the feature. (Straits Times)

Tesco has called on the UK government to order food companies to ensure all food sold in the UK is deforestation-free. The move comes in response to a new Greenpeace campaign calling on the supermarket to cut links to JBS, the world’s biggest meat company, over its alleged links to farms involved in Amazon deforestation. The supermarket says the UK should introduce due diligence across supply chains to monitor for deforestation. Germany is also weighing up a due diligence law on supply chains, reportedly supported by Chancellor Angela Merkel. On top of this, more than half of Britons would consider rejecting meat products linked to deforestation, a YouGov poll for Greenpeace has found. But Tesco said that while it has blocked Brazilian meat sales since 2018, it will not delist two JBS-owned meat suppliers. JBS said it was committed to ending deforestation throughout its supply chain. (The Guardian)

New Zealand adds gender-neutral title for voters ahead of polls

New Zealand authorities have added the gender-neutral title Mx for voters who do not identify as male or female, seeking to boost LGBT+ participation in next month’s election. Nearly 1,000 people have chosen the gender-neutral title since ‘Mx’ was added to voter sign-up forms alongside the existing Mr, Mrs, Miss, Ms and ‘other’, an official has said. The change was introduced late last year but only received public attention ahead of the Sept. 19 general election. LGBT+ group RainbowYOUTH described the move as “great”. “Being referred to correctly is a basic human right,” said Frances Arns, executive director of the Auckland-based group. New Zealand has long had a progressive reputation, but advocacy groups say LGBT+ people still face prejudice, and so-called gay conversion therapy remains legal. Officials have vowed to do better, including by collecting information on its LGBT+ population in the next census in 2023, to address concerns over the lack of specific funding or resources to help the community. (Thomas Reuters Foundation)

An investor group, the Institutional Investors Group on Climate Change (IIGCC), managing more than $16 trillion has launched the world’s first step-by-step plan to help pension funds and others align their portfolios with the Paris Agreement on climate change. Many investors have pledged high-level support to the goals of the 2015 Paris deal, but the “Net Zero Investment Framework” is the first to lay out the steps they need to take to ensure the commitment is backed up by the necessary action. Specific targets could include increasing the percentage of assets invested in low-carbon passive indexes and ensuring the leaders of investee companies link pay to climate-related targets. “Countries, cities and companies around the globe are committing to achieve the goal of net zero emissions and investors need to show similar leadership,” said IIGCC Chief Executive Stephanie Pfeifer. Developed with input from 70 global investors, including bond giant PIMCO and Dutch pension investor APG, the plan sets concrete targets at the portfolio and asset class level and also addresses asset allocation, engagement and lobbying. (Reuters)