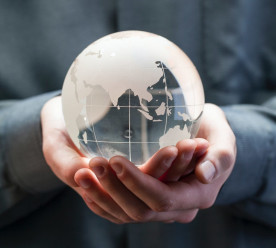 The World Meteorological Organisation (WMO) says there is a growing chance that global temperatures will break the 1.5C threshold over the next five years, compared to pre-industrial levels. It says there is a 20 percent possibility the critical mark will be broken in one year before 2024. But the assessment says there is a 70 percent chance it will be broken in one or more months in those five years. Scientists say that keeping below 1.5C will avoid the worst climate impacts and it was this target that was agreed by world leaders in the 2015 Paris climate accord accord. The new assessment says there’s a growing chance this level will be breached. Researchers say that the Earth’s average annual temperature is already more than 1C higher than it was in the 1850s – and will probably stay around this level over the next five years. Previous studies had put the short-term chances of going above 1.5C at 10% – that’s now doubled say the climate modellers, and it’s increasing with time. (BBC)

The European Commission yesterday unveiled its long-awaited hydrogen strategy, outlining its vision to ramp up the EU’s renewable hydrogen capacity from 1GW today to 6GW by 2024 and 40GW by 2030. The Commission said its priority would be to develop green hydrogen, produced by electrolysers powered by renewable energy. However, in a move that sparked criticism from some green groups the Commission confirmed it would also support blue hydrogen, produced using fossil fuels at plants that could be linked to carbon capture and storage (CCS) systems in the short and medium term. The EU Hydrogen Strategy published today argues the sector has the potential to rapidly expand, estimating that the installation of at least 6GW of renewable hydrogen electrolysers in the next four years could produce up to one million tonnes of the clean fuel. By 2030, the Commission said the bloc could be producing up to 10 million tonnes of renewable hydrogen with some 40GW of electrolysers. (BusinessGreen)

President of the European Central Bank (ECB) Christine Lagarde has given the clearest signal yet that she is poised to ramp up the central bank’s green efforts, declaring that she is prepared to “explore every avenue available in order to combat climate change”. Lagarde hinted that bank would consider proposals from campaigners for it to use its €2.8 trillion asset purchase scheme to pursue green objectives. Any move by the ECB to offload some of its bonds issued to carbon intensive companies would increase pressure on other central banks to follow suit. The Bank of England has said it is similarly considering incorporating climate considerations when undertaking corporate bond purchases. However, the Bank has also faced fierce criticism from green groups for failing to attach environmental conditions to the bailouts it has awarded in recent months, and campaign group Plan B today warned the Bank and the UK government could face legal action over the practice, which it argued could be in breach of national climate laws and the Paris Agreement. (BusinessGreen)

The coronavirus pandemic has exposed complacency and “misplaced triumphalism” by international aid organisations that have taken credit for progress on eradicating extreme poverty, a top United Nations rights official said. Global entities have failed to end severe hardship around the world, and Covid-19 will plunge even more people into dire economic straits, said Philip Alston, the outgoing UN special rapporteur on extreme poverty and human rights. Covid-19 has exposed how vulnerable poor people are, unable to practice safety measures like staying home and forced to risk getting sick because they need to keep working, said the report. The report used the World Bank’s definition of extreme poverty as living on $1.90 a day or less. A separate report published in June by UNU-WIDER, part of the United Nations University, said economic fallout from the pandemic could swell the number of people living on less than $1.90 a day to as many as 1.12 billion. (Eco-Business)

Banks and pension funds among investors bankrolling meat and dairy

Banks, investors and pension funds have poured billions into the world’s largest meat and dairy companies over the past five years, a new report by the UK-based campaign group Feedback has found. The report describes meat and dairy production as a “fundamentally extractive business model and compares the environmental impact of “‘big agriculture” to that of big oil. The report, published on Thursday, said private financial backing for the world’s 35 largest meat and dairy companies totalled an estimated $478 billion between January 2015 and 30 April this year. The financing came in the form of loans, bonds and share ownership from the likes of BNP Paribas, Barclays, HSBC, Prudential UK, Standard Life Aberdeen, Legal & General and UK pension funds. ”. Feedback’s report found that over the past five years HSBC had loaned Brazilian meat companies Marfrig and Minerva more than “$1.8bn and as of April 2020 held shares to the tune of $9m in JBS”. JBS, Marfrig and Minerva have been linked to cattle practices that lead to Amazon deforestation. (The Guardian)