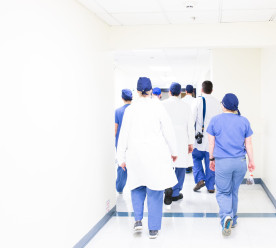 More than 40 million healthcare professionals from around the world have urged global leaders to build a healthy, climate-friendly economic recovery from the coronavirus crisis, in an open letter today backed by the World Health Organisation (WHO) among a raft of other influential groups. Signatories to the letter, which collectively represent more than half of the global healthcare and medical workforce, include more than 200 medical groups, marking what its coordinators claim to be the biggest mobilisation across the sector since the run up to the Paris Agreement in 2015. Their statement calls on leaders of the world’s biggest economies to draw up recovery packages which invest in safeguarding public health and providing jobs, and highlights how sustainable agriculture, green energy, and clean transport are key to a healthy recovery. Coordinated by the WHO alongside the Global Climate and Health Alliance and air pollution campaign group Every Breath Matters, it urges G20 governments to take steps to shift subsidies away from fossil fuels towards renewables and low carbon technologies after Covid-19. (Business Green)

HSBC, in partnership with the World Banks‘s sister organisation the IFC, has raised £386 million to support investments into climate mitigation across developing countries and markets. HSBC Global Asset Management and IFC have each committed £61 million to the HSBC Real Economy Green Investment Opportunity GEM Bond Fund (REGIO), acting as anchor investors for the fund. Seven other private investors have joined the initiative, bringing the fund’s total to $474 million at the third closing. The two investors expect others to commit to the fund, which focuses on attracting investments in developing economies, later this year. REGIO will access both public and private capital to fund climate mitigation projects in markets where access to capital is limited, especially during the market turmoil caused by Covid-19. The green bond will be supported by IFC, which is the largest global development institution focused on the private sector in emerging markets. (edie)

Communications company BT reaped £5.5 billion in revenue from products and services which it claims helped customers avoid a collective 13 million tonnes of carbon dioxide emissions worldwide last year. That is one of the headline conclusions from the technology giant’s latest annual sustainability report, which provided an update on its progress towards becoming a net zero business by 2045. The annual report revealed BT has now achieved a 42 percent reduction in carbon intensity since 2016/17, putting it broadly on track to deliver on its science-based target to reduce its 2016 emissions by 87 percent by the end of the decade. The report details how services such as broadband, teleconferencing, remote apps, automation, and cloud-based networking products generated over £5.5 billion of revenues worldwide for the firm in 2019-20, while also helping reduce greenhouse gases by cutting energy use, avoiding need for travel, and reducing manufacturing and material demand. (Business Green)

UK supermarket Iceland has cut down its food waste by almost a quarter over the past two years, saving almost 2,500 tonnes from being binned through a greater focus on measurement and efficiencies across it stores, as well as redistributing unsold food to charities and supermarket staff. The food retailer has announced a 23.5 percent drop in food waste across its business since 2018, putting it well on track to halve food waste across its operations by 2030, in line with the target set out in the UN Sustainable Development Goals. Last year Iceland sold over 1.3 million tonnes of food to its customers but sent zero food waste to landfill, instead donating surplus food to local communities, converting it into animal feed, or “as a last resort” processing it into energy through anaerobic digestion, it said. As a next step, Iceland has announced plans to go ahead with a national rollout of a 100-store trial, which saw store staff given surplus food at closing time each day. (Business Green)

From collapsing supply chains to power grabs by populist leaders, the coronavirus pandemic has revealed how a crisis can swiftly ramp up wider security risks – a clear warning as climate change looms large, security experts have warned. “These threats can have massive implications beyond what we’ve ever planned for,” said Kate Guy, a senior research fellow at the Center for Climate and Security, a U.S.-based think-tank. As leaders scramble to learn lessons from the COVID-19 crisis, they also need to think ahead to climate risks, which are “the next big thing – the longer-term, more intense form of this (coronavirus) crisis”, she told an online event. Countries around the world have for years analysed how security threats, from terrorism to nuclear weapons use, could play out globally. A hotter planet could bring shocks to global food systems, dry up vital water supplies or give populist leaders an excuse to give themselves broad emergency powers, as seen in the Philippines and eastern Europe with COVID-19, Guy said. (Thomas Reuters Foundation)