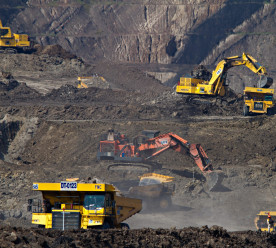 New research has found that recent announcements from European oil and gas majors such as Total, Shell and BP to commit to net-zero are actually not aligned to the required, science-based cuts to emissions to reach net-zero or the 1.5C target of the Paris Agreement. The analysis was conducted by the Transition Pathway Initiative (TPI), an investor initiative backed by over $19 trillion of global capital. It revealed that none of the carbon goals set by Shell, Eni, Total and Repsol are aligned with the 1.5C pathway or the net-zero movement. In addition, BP and OMV were found to be the only firms in the European sector that have targets in place that fail to align with the 2C pathway of the Paris Agreement. The TPI estimates that European oil and gas companies need to cut emissions intensity by 70% between 2018 and 2050 to align with a 2C climate scenario – which some are – but that none have set genuine net-zero targets, which would require a 100% cut in absolute emissions. (Edie)

Coal power plant construction will push ahead in Asia despite falling electricity demand and environmental concerns as policymakers prioritise boosting economies crippled by the coronavirus pandemic, analysts say. China, which produces and consumes about half of the world’s coal, has in recent weeks said it would allow more provinces to start building coal power plants starting in 2023. Japan and South Korea are expected to continue to fund coal plants in developing countries like Vietnam and Indonesia to support state-backed industries hurt as domestic coal operations wind down to meet carbon-emission commitments. “China and other governments may be tempted to invest in coal power to help their economies recover after the COVID-19 pandemic,” said Matt Gray, co-head of power and utilities at Carbon Tracker, a climate think tank. The analysis dampens some hopes for a once-in-a-generation opportunity to launch a ‘green recovery’, which includes Asia joining the global trend of ending support for coal power. (Reuters)

The UK Government has announced plans to fast-track £250 million of funding and accompanying policy reforms to deliver a “new era for cycling and walking” as the UK begins to ease to lockdown. The wide-ranging package promised to introduce a £250 million Emergency Active Travel Fund to support the development of pop-up bike lanes, wider pavements, and cycle and bus-only corridors. The Department for Transport said the fund was the first stage of a £2 billion programme designed to embed the increase in walking and cycling that has occurred during the nationwide lockdown. It also unveiled plans to fast-track trials for e-scooters rental schemes, in a bid to make it easier for urban commuters to get to work. A coalition of nine NGOs, including Greenpeace UK, Living Streets, Cycling UK, Transport & Environment and CPRE, is calling for at least £6 billion in funding over the next five years to help reach a target of doubling cycling and increasing walking by 2025. (Business Green)

Electrical engineering giant Schneider Electric and clean tech hub Sustainable Ventures have teamed up to launch a competition for entrepreneurs that aims to help catalyse the development of a new generation of sustainable ‘smart home’ technologies. The firms’ ‘Net Zero Home Programme’, which opened to applicants today, is soliciting pitches for innovative solutions from clean tech start-ups and SMEs that could “make the net zero home a reality”. A net zero building is one that is highly efficient and produces at least as much renewable energy as it consumes. Katie Mills, head of innovation at Schneider Electric, said it was imperative that household energy was used more prudently as electrification replaces fossil fuels in homes in the decades to come in pursuit of the UK’s net zero goal. “Homes must become smarter, more connected and more efficient. Consumers, businesses and governments need to be able to optimise household energy use, from heating and lighting to energy generation, consumption and storage.” (Business Green)

A $2.25 billion United Airlines debt offering failed last week, but that does not signal trouble for others in the corporate debt market where the US Federal Reserve’s promise of liquidity has corporate America issuing new debt at a record pace for a seventh week. Market pros say United Airlines, in an industry severely impacted by the coronavirus, was most likely unable or unwilling to meet buyers on price and terms after three days of trying. The deal, pulled Friday, was tied to 360 older jets, or about 40 percent of the United fleet. There has been about $575 billion in investment grade debt issued, after the Fed first said it would buy corporate bonds on March 23, according to Credit Flow Research. Analysts note other airlines were able to issue, including Southwest and Delta. For instance, Delta came to market in April. It issued $3.5 billion in 5-year bonds, which was secured by first liens on domestic slots at airports and it yielded 7%, according to Credit Flow Research. (CNBC)

Image source: Photography of excavators at mining area by Dominik Vanyi on Unsplash