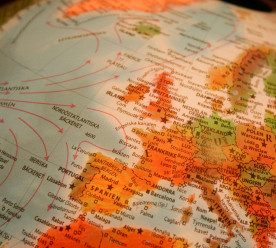 Swedish bosses urge Europe not to waste opportunity from Covid-19

Europe’s leaders must use coronavirus to make the continent’s economy more sustainable and accelerate investments in much-needed technology, according to the heads of two of Sweden’s biggest companies. The chief executives of Volvo Group and Swedbank told the Financial Times that as policymakers grapple with how to reopen economies across Europe, they need to think about how best to use stimulus packages to achieve the future they want. Authorities across Europe are struggling to plot a return to normal after locking down their economies to combat the Covid-19 pandemic. There is a growing worry among environmentalists and some business leaders that, in the rush to recover from the economic slowdown caused by coronavirus, governments may be prepared to scale back green measures. Mr Lundstedt, chief executive of Volvo, said the debate must not become about “health and safety versus finance and the economy”, as the former must always take precedence. But he added that it was important for leaders in all sectors to show what is coming next. (Financial Times)*

Australian banking giant Westpac has become the latest in a string of major investors to signal it is to sever ties with the thermal coal mining sector, pledging to end investment in the industry by 2030. In an update to its climate strategy, the company said it would support existing thermal coal customers, but would do so alongside “a commitment to reduce our exposure to zero by 2030”. As such, the bank has now committed to not establishing relationships with new thermal coal customers, limiting support for thermal coal mines or projects to existing basins and maintaining strict quality criteria for any lending. It added that it would continue to provide financing for metallurgical coal production, but would do so while seeking to “support technological developments and industry initiatives that reduce the dependence of the steel industry on coal”. The company also stressed that while it would continue to invest in carbon intensive sectors, it would aim to do so in line with the Paris Agreement. (Business Green)

Packaging specialist DS Smith has established a set of circular design principles that it hopes will guide the development of a consistent approach to sustainable design that will prompt consumers to recycle more and waste less. The principles, designed with circular economy charity the Ellen MacArthur Foundation, were announced as DS Smith published the results of a company-comissioned survey that revealed some 30 percent of British consumers admitted to throwing recyclable material into general waste. More than half of the 2,000 respondents blamed unclear information on packaging for a lack of recycling, while 83 percent of people said they were unsure what packaging could be recycled. DS Smith hopes that its new circular design principles will help end confusion and thus prevent recyclable products from being sent to landfill, a phenomenon it claims costs the UK economy some £95 million each year. The concept of circular economy is being increasingly adopted as companies face a growing public backlash over wasteful practices. (Business Green)

Strengthening environmental regulations must be a key plank of the UK’s recovery from the coronavirus crisis to help prevent the spread of future pandemics, a cross-party group of 26 MPs have said. In a letter organised by Caroline Lucas, the Green party MP, the MPs asked the chancellor to provide funding, and to recognise in economic recovery plans that human health is dependant on that of animals, plants and the environment. There were also calls to reform the financial system to protect nature and demands for industry bailouts to contain strict conditions on their future environmental performance. The MPs are asking for environmental regulations to be strengthened and enforced, and any economic support for industries such as aviation and intensive agriculture to be conditional on environmental sustainability commitments. They also call for better funding of healthcare, and an approach to economic decision-making that takes into account health and environmental concerns, including the full costs and consequences of policies for people and nature. (The Guardian)

Working from home could be the new normal for many employees as more major employers and CEOs, including Mondelez, Nationwide and Barclays, talk about a permanent shift to work from home and reduced office space. Companies have been forced to embrace remote working amid stay-at-home orders for all nonessential positions and businesses. Nationwide, which has gone to 98% work from home during Covid-19, has announced a permanent transition to a hybrid model, with working-from-office in four main corporate campuses and working-from-home in most other locations. Meanwhile, Mondelez CEO Dirk Van De Put has said the coronavirus crisis has showed “we can work in different ways,” and as a result, the company does not need all its global offices. Morgan Stanley CEO James Gorman also suggested that working patterns after the lockdown may continue the current necessities, stating that the company may need “much less real estate” in the future. Similarly, Barclays CEO Jes Staley said crowded corporate offices with thousands of employees “may be a thing of the past.” (CNBC)