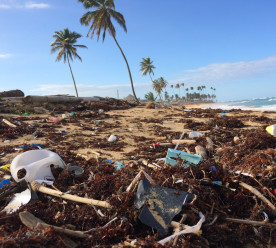 A new science-based metric has been produced by a range of public, private and scientific stakeholders to enable businesses to identify hotspot areas of plastic entering the natural environment. The ‘Plastic Leak Project’, which involved the collaboration of 35 businesses and public organisations, released the new methodology to map, measure and forecast how much plastics and microplastics leakage can occur across value chains. The project was launched in 2019 and has since garnered stakeholder support from multinationals such as Adidas, Decathlon, Mars and McDonald’s amongst others. The project defines ‘plastics leakage’ as the potential amount of plastics (both macro and micro) that are not managed at the end-of-life or kept in the circular economy. “The Plastic Leak Project has made important advancements towards a credible accounting system for plastic leakage at product level,” WWF US’s manager for plastics and packaging Alix Grabowski said. (edie)

Norway’s $1 trillion sovereign wealth fund will exclude four companies for their vast emissions of greenhouse gases, or at least put them on probation to force them to change, the chairman of its ethics watchdog told Reuters. The chairman, Johan H. Andresen, has recommended the fund divest shares in the four polluters, after probing the oil, steel and concrete industries. The four companies were “worst in class” compared with peers in the same sectors but also compared with other sectors, he said. The Norwegian central bank, which manages the fund, should make announcements about the firms imminently, the chairman added. Companies to be excluded are not named until the fund has sold the shares, to avoid the stock falling in value beforehand. To avoid blacklisting, companies should have a plan showing how they intend to adapt to climate change, with specifics crucial, Andresen said. The world’s largest sovereign wealth fund has massive market influence owing to its 1.5 percent ownership of the world’s listed shares. (Thomas Reuters Foundation)

Australia and New Zealand multinational bank ANZ has agreed to compensate more than 1,000 Cambodian families that were forcibly displaced by a sugar company it loaned money to in 2011. Advocates are calling the step a watershed moment for human rights in the global banking sector. The decision to pay the families with interest earned by the loan, as well as offering an admission that the bank failed to conduct proper due diligence on the project, ends a long-running dispute over ANZ’s 13-year expansion into Cambodia. Problems began in 2011, when ANZ’s Cambodian arm approved a loan to Phnom Penh Sugar, a company that had seized and destroyed the land and homes of 681 families from Kampong Speu Province in the country’s south-west, according to non-government organisations representing the families. At the time the sugar company was seeking finance, activists and international media publicised its use of child labour as well as its violent clashes with local groups. (Sunday Morning Herald)

OVO teams up with Mini to offer EV drivers up to ‘5,000 free green miles’

Mini electric vehicle (EV) owners are being offered up to 5,000 free, zero carbon miles driving on the road if they switch their home energy supplier to OVO Energy, under a new partnership announced by the two companies. Car brand Mini, which is set to start deliveries of its first fully-electric cars next month, said those purchasing the new EV would also be able to secure free charging at home for up to 5,000 miles by switching to OVO’s EV Everywhere home energy package. “Our Mini Electric customers have already taken a big step in lowering their carbon emissions, so we’re pleased now to recommend this exclusive offer with OVO Energy, for those drivers who want to reduce their footprint even further,” said Mini UK director David George. The move is the latest of a string of auto manufacturer and EV tariff tie-ins, with a host of EV firms partnering with energy specialists to offer tailored tariffs and subsidised charge point installations. (Business Green)

Electricity Supply Board (ESB) has signed a €1.4 billion sustainability-linked loan deal aimed at pushing the Irish state-owned energy firm to deliver on its emissions goals and scale up its renewable energy capacity. The five-year agreement marks the ESB’s first syndicated sustainability-linked loan, for which the interest rate paid will be dependent on the firm’s performance against a range of green targets set out in its 2030 strategy. The targets include reducing the carbon intensity of its power generation output by 40 percent and increasing its renewable electricity generation by 170 percent by 2026, both against a 2018 baseline. ESB said its performance against these targets would be tested throughout the five-year lifetime of the green loan, with the potential for an interest rate reduction if the goals have been met. Equally, higher interest rates would be imposed if the goals are missed. (Business Green)

Image Source: photo of coconut tree near seashore by Dustan Woodhouse on Unsplash.