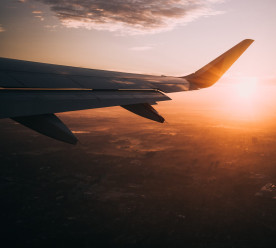 Plans for a third runway at Heathrow, the UK’s largest airport, have been ruled illegal by the court of appeal because ministers did not adequately consider the government’s climate change commitments to achieve net zero emissions by 2050. The ruling is a major blow to the project at a time when public concern about the climate emergency is rising fast. The prime minister, Boris Johnson, could use the ruling to abandon the project, or the government could draw up a new policy document to approve the runway. Heathrow is already one the busiest airports in the world, with 80 million passengers a year. The £14 billion third runway would bring 700 more planes per day and a big rise in carbon emissions. The court’s ruling is the first in the world to be based on the Paris agreement and may have an impact both in the UK and around the globe by inspiring challenges against other high carbon projects. (The Guardian)

Ride-hailing services found to increase emissions in US cities

Ride-hailing services are increasing carbon emissions in cities, with trips creating more pollution than comparable private car rides and passengers being drawn away from public transportation, according to a new study on seven U.S. cities. The report by the Union of Concerned Scientists, a non-profit advocacy group, called on companies like Uber and Lyft to electrify their fleets, increase the share of pooled rides and improve connections to public transit hubs. The study represents the first attempt to quantify the pollution created by ride-hailing following several studies over the past two years on the negative impact of ride-hailing on inner-city congestion. Researchers found that, on average, a solo ride-hailing trip emits nearly 50 percent more carbon dioxide than one in a private vehicle. Both companies run a fleet of electric scooters and bikes and have begun integrating public transit information into their apps. They also promote vehicle electrification in some cities. (Thomas Reuters Foundation)

New Zealand has made a pioneering international donation to a fund to help Fijian communities forced to move by rising seas and extreme weather driven by climate change. The $2 million donation, part of a broader $150 million package of climate change assistance to Fiji, aims to support efforts already underway to resettle people at risk from sea level rise and other climate-related threats. “Five communities have been moved to date and a further 42 have applied for government support to move,” said New Zealand Prime Minister Jacinda Ardern. The donation was the first international government contribution to Fiji’s Climate Relocation and Displaced Peoples Trust Fund. Finding money to pay for rising “loss and damage” from climate change impacts – including forced migration or relocation – is expected to be a key issue at UN climate negotiations in Glasgow later this year. (Thomas Reuters Foundation)

UK online food order and delivery service Just Eat will trial compostable takeaway boxes lined with seaweed at selected restaurants, a move which will prevent around 3,600 plastic boxes from entering the waste stream. Just Eat has teamed up with the manufacturers Notpla, which had been supplying seaweed sachets for condiments for Just Eat, to trail seaweed-lined cardboard takeaway containers. The containers are made from tree & grass pulp with no synthetic additives. The replacement boxes are fully recyclable and can also decompose in home composts in four weeks. It is estimated that 500 million plastic takeaway boxes are used across the UK takeaway industry annually, many ending up in landfill even after reuse. Just Eat has also revealed that using the Notpla seaweed sachets have stopped more than 46,000 plastic sachets from entering customer homes. (edie)

Online gaming firm Mr Green, which is owned by bookmaker William Hill, has been hit with a £3 million penalty for failing to protect gambling addicts. The Gambling Commission also said the company did not have effective procedures to check customers were using legitimate sources of money and that its investigation had uncovered “systemic failings”. It failed to freeze the account of a customer who gambled away £50,000 of winnings before depositing thousands more. Mr Green is the ninth company to face penalties as part of a probe by the Gambling Commission into safeguarding failures by online casinos and poor measures to prevent money laundering. The Gambling Commission has issued more than £20m in penalties since 2018. The money will go to the National Strategy to Reduce Gambling Harms, which provides treatment and support for addicts. (BBC)

Image Source: airplane on sky during golden hour by Nils Nedel on Unsplash.