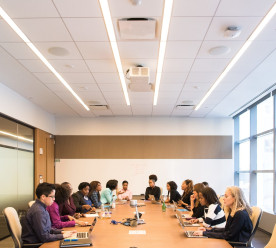 FTSE firms ‘dragging their feet’ over ethnic diversity on boards

FTSE 100 firms including Tui, British Airways owner IAG and the London Stock Exchange Group have been accused of dragging their feet on diversity targets ahead of a looming 2021 deadline. Only 53 of Britain’s largest listed firms on the London Stock Exchange have at least one director from an ethnic minority, according to figures compiled for the second annual update on the Parker review. That is a small increase from the 49 companies that had met the target since the review was launched in 2017. Among the FTSE 100 companies that have failed to take steps to improve diversity are mining firm Glencore nand housebuilders Taylor Wimpey and Persimmon. The Parker review gave FTSE 100 firms four years to appoint at least one non-white board-level director. The same target was set for the FTSE 250 but with a deadline of 2024. Only 54 of the firms listed on the FTSE 250 have reached that goal. (The Guardian)

Social media giant Twitter has said that it will more aggressively examine fake or altered photos and videos. Starting in March, the company said, it will add labels or take down tweets carrying manipulated images and videos. The move, while short of an outright ban, was announced one day after YouTube also said it planned to remove misleading election-related content on its site. Twitter’s new policy highlights a balancing act between allowing parody and removing disinformation. To determine whether a tweet should be removed or labelled, Twitter said it will apply several tests: Is the media included with a tweet significantly altered or fabricated to mislead? Is it shared in a deceptive manner? In those cases, the tweet will probably get a label. But if a tweet is “likely to impact public safety or cause serious harm,” it will be taken down. (New York Times)

A “sustainability charge” on meat to cover its environmental damage could raise billions to help farmers and consumers produce and eat better food, according to a new report. The levy, which would increase the price of a steak by about 25 percent, would be phased in over the next decade. The report focuses on EU countries and was produced for the Tapp Coalition of health, environment and animal welfare organisations. The report, produced by environmental research group CE Delft, analysed the costs of greenhouse gas emissions, other air and water pollution, and losses of wildlife associated with livestock production. It estimated that covering these costs would increase the price of beef by €0.47 (40p) per 100g. The report suggests such charges could reduce consumption of beef in the EU by 67 percent, pork by 57 percent and chicken by 30 percent by 2030. As well as reducing emissions by 120m tonnes a year, the charges would raise €32 billion a year for EU member states. (The Guardian)

Bookmakers are considering a voluntary ban on football shirt sponsorship and pitch side advertising, a parliamentary committee has heard. It would expand on the whistle-to-whistle ban on television gambling adverts introduced last year. Currently half of Premier League clubs and 17 of 24 Championship clubs are sponsored by bookmakers. That had led to concerns about the potential impact on young fans and vulnerable people. Brigid Simmonds, chair of the The Betting and Gaming Council (BGC), which represents 90 percent of the betting and gaming industry, told the House of Lords’ Gambling Industry Committee that the whistle-to-whistle ban has reduced gambling advertising on television by 85 percent. However, she conceded that some of the advertising may have moved online and added: “We may well need to do more and we are absolutely open to that.” GVC, the parent company of Ladbrokes and Coral, has already withdrawn its sponsorship in football. (BBC)

Sodexo steps up single use plastics crack down

Food services giant Sodexo has banned products containing unrecyclable polystyrene and single-use plastics from its supply chain. All single use plastic food service items, such as takeaway boxes and cups made from unrecyclable polystyrene, will no longer be available to purchase. Sodexo’s retail operations will also stop providing single use plastic bags and will offer customers paper or reusable bags to purchase as an alternative. The commitment is part of the company’s wider sustainability strategy and builds on its May 2018 move to abandon the use of plastic stirrers and straws, preventing 1.8 million of each from being thrown away a year. In related news, supermarket Iceland has announced it is to launch a trial to reduce plastic packaging by 93 percent across a range of fresh produce items. The retailer expects the trial alone to remove seven tonnes of plastic, which will rise to 440 tonnes if the approach proves successful and is rolled out to all stores. (Business Green)