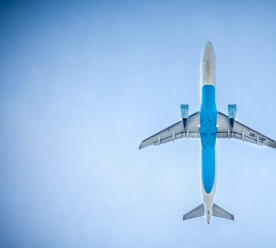 UK aviation chiefs have signed up to a plan to deliver net zero emissions by 2050, pledging to accelerate the use of more efficient aircraft, modernise flight operations and drive the market for low carbon fuels made from waste. The plan, entitled ‘Decarbonisation Road-Map: A Path to Net Zero’, covers all flights departing the UK. It calculates that the sector could save 23.5MtCO2 by introducing more efficient aircraft in the short term, followed by hybrid electric planes from 2035. The coalition plans to tackle the remaining emissions through international market-based measures or offsets. The UK Sustainable Aviation coalition consists of major UK airlines, airports, manufacturers, air navigation service providers and key business partners and says it is confident the plan can cut carbon emissions while still accommodating the forecast 70 percent growth in passenger numbers through to 2050. However, Greenpeace have criticised the strategy as “a flight of fancy” owing to the reliance on offsets. (Business Green)

U.S. Federal Communications Commission (FCC) Chairman, Ajit Pai, said that the telecommunications regulator plans to take actions following the finding of their enforcement bureau “that one or more wireless carriers apparently violated federal law”. The FCC referred reports to its enforcement bureau to investigate the apparent unauthorized sale of real-time location data from users which could have allowed the location of mobile phone customers to be tracked in May 2018. Pai said he soon plans to circulate to the five-member FCC commission a formal notice of liability to one or more carriers. However, the FCC Commissioner, Jessica Rosenworcel, said it was a “shame” the FCC took so long to act on what she called reports that “shady middlemen could sell your location within a few hundred meters based on your wireless phone data.” She added, “It’s chilling to consider what a black market could do with this data”. (Reuters)

India aims to boost solar power generation by encouraging the installation of panels along rail tracks and on barren land, according to Nirmala Sitharaman, India’s finance minister. The plans come as the country looks to cut its carbon footprint and accelerate clean energy production. India, Asia’s third-largest economy, has set a target to raise renewable energy capacity to 175 gigawatts by 2022 and is looking to accelerate clean energy production as some coal-fired power plants face closure. The proposal under consideration to set up large solar power capacity alongside rail tracks and raised the outlay for the renewable energy ministry by 48 percent for 2020/21. Sitharaman also stated plans to lower tax rates to utilities, which some experts say should mostly help boost renewable energy. In a further measure to reduce carbon emissions, India has launched a scheme to encourage farmers to use solar instead of diesel-fired irrigation pumps. (Reuters)

More than a third of workers in Britain are struggling in low-quality jobs that risk damaging their health, according to research. In a report exposing the scale of precarious, low-paid or unfulfilling employment across the country, the Health Foundation, a health care charity and think tank, said that as many as 36 percent of workers in Britain, about 10 million people, were in such a position. The thinktank said young adults, minority groups and employees outside the south of England were most likely to be affected, using evidence from a survey of more than 40,000 people in the UK. While more people are in work than at any time in history, the charity warned that a proliferation of low-quality employment carries health risks. As many as 15 percent of workers in low-quality jobs say they have poor quality health, compared with 7 percent in good working environments, according to the research. The report warned that substandard employment extended far beyond zero-hours contracts and the gig economy. (The Guardian)

Just over 400,000 people officially signed up to follow a vegan diet in January 2020, far exceeding the 250,000 who participated a year earlier, according to figures released by the Veganuary campaign. A raft of new plant-based foods and menu items were also launched to coincide with the month-long event, including the first vegan offerings from fast-food giants KFC, McDonald’s, and Burger King. Sales of many of the new product lines exceeded expectations, according to campaign organisers. KFC said it sold one million vegan burgers last month, equivalent to one every three seconds, while takeaway firm Deliveroo said orders of vegan dishes rose by 78 percent during January 2020 compared to a year earlier. Retailers also saw interest in vegan products soar, according to Veganuary. Sales of Hellman’s ‘Vegan Mayo’ reportedly grew nearly 400 percent in Tesco during last month, while Marks & Spencer reported sales of its ‘Plant Kitchen No Chicken Kiev’ at a rate of four every minute. (Business Green)