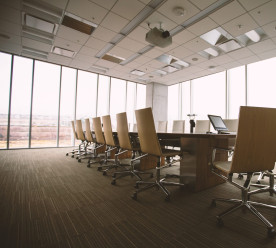 Legal & General Investment Management (LGIM) has pledged to punish all company chairs who also hold the chief executive role in a bold move that will see it take on the bosses of BlackRock, JPMorgan, Facebook and hundreds more globally. LGIM, one of the top 20 largest investment companies in the world, said it will vote against the re-election of all combined chair/CEOs from this year. Combined chair/CEOs can be found on 47 percent of S&P 500 boards, 48 percent of Spain’s largest companies and more than half the CAC 40 companies in France. The issue of splitting the combined roles has risen up the agenda in recent years, often linked to scandals at businesses such as Well Fargo and Boeing. Sacha Sadan, director of investment stewardship at LGIM, said the separation of the roles “provides a better balance of authority and responsibility, that aligns with the best long-term interests of companies and investors”.  (Financial Times*)

Social media giant Facebook said it will take down misinformation about China’s fast-spreading coronavirus from its platform, in a departure from its past approach to dubious health content. Facebook said in a blog post that it would remove content about the virus “with false claims or conspiracy theories that have been flagged by leading global health organizations and local health authorities,” saying such content would violate its ban on misinformation leading to “physical harm”. The move is more a more proactive approach for the world’s biggest social network, which generally looks to limit the distribution of health misinformation to its 2.9 billion monthly users through restrictions on search results and advertising rather than taking down the posts. Fact-checking initiative PolitiFact said misinformation about the virus online included hoaxes about its source, its spread, and how to treat it, as well as false conspiracies about its connection to biological warfare and the Chinese government. (Reuters)

Trump declares anti-human trafficking push but some stay away

U.S. President Donald Trump has vowed to boost measures to fight human trafficking at an event at the White House, but several anti-trafficking groups skipped the meeting amid criticism that his immigration policies enable modern slavery. Next year’s government budget will request $70 million to fight trafficking, and an anti-trafficking official will be named to the White House domestic policy council. An estimated 400,000 people are believed trapped in modern slavery in the United States, from sex work to forced labour, according to the Walk Free Foundation, a human rights group. Jean Bruggeman, executive director of Freedom Network USA, a trafficking survivors advocacy group, opted not to attend the anti-trafficking summit alongside members from at least 8 organisations. Bruggeman noted that the administration’s policy to limit the number of asylum seekers allowed to cross the border and other immigration policies mean people fleeing trafficking are not getting help they need. (Thomson Reuters Foundation)

Climate breakdown and the global crisis of environmental degradation are increasing violence against women and girls, while gender-based exploitation is in turn hampering our ability to tackle the crises, a major report has concluded. The study, by the International Union for the Conservation of Nature, also stated attempts to repair environmental degradation and adapt to climate breakdown are failing and resources are being wasted because they do not take gender inequality and the effects on women and girls into account. Campaigners called for governments and institutions to take note, saying that the impacts on women and girls must be at the heart of any viable strategies on the climate and ecology. The report notes that in many parts of the world, women are already disadvantaged and lack land rights and legal rights, so are vulnerable to exploitation. Mary Robinson, chair of The Elders, a human rights and peace activist group, added that “women’s participation brings with it creative and sustainable solutions to both the climate emergency and social injustices”. (The Guardian)

The UK Government Department for International Trade (DIT), which is led by Liz Truss, the Minister for Women and Equality, has stated that its gender pay gap has widened over the past year. The result forces the department to review its plans to tackle the imbalance between what it pays male and female employees. Despite the British government’s ambitions to make the civil service the UK’s most inclusive employer this year, four departments reported a rise in the gap between what men and women are paid. The DIT showed the biggest increase in pay disparity, taking its median gender pay gap to 12.9 percent. The DIT said that it would review and update its gender pay gap action plan, invest in talent and leadership schemes, and aim to attract women into traditionally male-orientated professions and roles within the department. This includes looking into the causes of why there are fewer women in overseas posts. (Financial Times*)