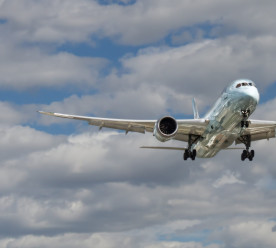 Families of people killed in crashes of the Boeing 737 Max airplane model have reacted with anger at the revelation that the company’s ousted CEO received benefits and share options potentially worth $80 million. The aerospace manufacturer said CEO Dennis Muilenburg would receive no severance and forgo his 2019 bonus, yet he would receive other contractual benefits. However, bereaved families are arguing that Muilenburg is not contractually owed anything. The news comes as documents disclosed to regulators and congressional committees investigating the causes of two fatal crashes of the 737 Max aircraft, have called the company’s values into question. They show some Boeing employees discussing attempts to mislead aviation regulators, while others worried about “a culture of ‘good enough’” or choosing “the lowest ranking and most unproven supplier…solely because of bottom dollar”. Other employees said they would not put their own families on the 737 Max and that the airplane was “designed by clowns”. Boeing has said the communications “do not reflect the company we are and need to be, and they are completely unacceptable.” (Financial Times*; Financial Times*)

Mattress giant Casper has named its own social-media influencers as one of the risk factors facing its initial public offering. The US company emerged benefited from exposure when media personality Kylie Jenner, who has more than 150m followers on Instagram, showed off pictures of its product. Filing for an IPO, Casper warned investors that its inability to control future messaging by such influencers could put their money at risk. “Use of social media and influencers may materially and adversely affect our reputation,” the company wrote in its offering documents, as influencers could “engage in behaviour or use their platforms to communicate directly with our customers in a manner that reflects poorly on our brand.” Influencer marketing has expanded into an $8 billion business as celebrities, experts and other people with large followings on social media platforms charge to promote products. Social media influencers are also becoming a legal risk for companies as US and UK regulators issue guidelines that call on influencers to more conspicuously disclose their relationships with brands. (Financial Times*)

Women are still vastly underrepresented in positions of power, with slow progress across sectors meaning that the UK is still “generations away” from achieving equality, according to research by the Fawcett Society, a women’s rights and equality charity. The 2020 ‘Sex and Power Index’, charts how women remain omitted from top jobs in politics, the law, civil service, trade unions, charities, professional bodies and sport bodies. Sam Smethers, the Fawcett Society’s chief executive, said that “despite much lip service about the importance of having women in top jobs…we are wasting women’s talent and skills”. The Fawcett Society is calling on the UK government to improve gender pay gap reporting by reducing the threshold for doing so to 100-plus employees, requiring companies to publish action plans and introducing reporting on the gender pay gap by ethnicity. It is also urging the introduction of time-limited quotas for use across public bodies and the boards of large corporate organisations and for the government to make flexible working the default. (The Guardian)

Global brewer AB InBev has signed a 10-year agreement with global energy giant BayWa r.e to purchase 100 percent renewable electricity to power its Western European breweries. BayWa r.e. will develop two new solar farms in Spain, one which will provide 250 gigawatt-hours of renewable electricity annually for AB InBev’s 14 breweries in Western Europe and more than 50 brands brewed and sold across 12 countries. The new solar farms are expected to come online in March 2022. In the meantime, BayWa r.e. will provide AB InBev with 75GWh of Guarantees of Origin from its wind farm “La Muela” in Zaragoza, Spain. Over the duration of the purchase power agreement (PPA), enough renewable electricity will be generated to power the equivalent of almost 670,000 European homes. AB InBev’s zone president for Europe Jason Warner welcomed the new European Green Deal and is asking “our consumers, customers, colleagues, business partners and fellow companies to join us in shifting towards renewable power”. (edie)

To reach net zero emissions by 2050 the UK will need to increase its capacity to produce low-carbon energy four-fold and invest significant sums in transforming the way the grid handles intermittent green power. This is according to engineering consultancy Atkins, which released a major new report detailing the changes needed to the UK’s energy mix to bring net emissions to zero. Much of the success of the government’s flagship climate target rests on the performance of offshore wind, which is expected to supply 58 percent of the UK’s electricity needs by 2050. The government has said it intends to increase its goal for offshore wind from 30GW to 40GW of capacity by 2030. The government is also preparing to unveil a much-anticipated ‘Energy White Paper’ that is expected to include new measures for mobilising investment in nuclear and CCS projects, both deemed essential to reaching net zero emissions by 2050. (Business Green)