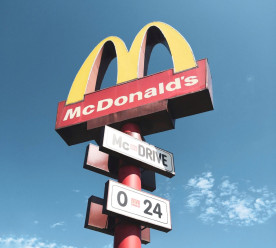 Two senior executives at fast food giant McDonald’s have filed a lawsuit against the company, accusing it of discriminating against African-American customers and staff. They claim that under the leadership of UK-born Steve Easterbrook, who became chief executive in 2015, the company has “conducted a ruthless purge” of high-ranked African-Americans and shifted advertising away from black customers. Mr Easterbrook was fired last year for a mutual romantic relationship with a colleague in violation of company rules, but his successor, Chris Kempczinski, is also named in the complaint. McDonald’s said they disagree with characterisations in the complaint. The firm said it has reduced the number of “officer level” positions over the last five years but that people of colour account for 45 percent of the firm’s corporate officers – an increase since 2013 – and all of its 10 field vice-presidents in the US. They lawsuit accuses McDonald’s of practising “systematic but covert” racial discrimination “over the years” but it became “overt, unmistakable, non-coincidental and highly damaging” after the 2015 leadership change. (BBC)

Sustainable packaging may be worse for the environment than plastic

A report published by Green Alliance has found that the decisions to remove plastic are often made without considering the full environmental impact of the substitute material and cause other environmental problems. Green Alliance interviewed representatives from five of the UK’s major supermarkets and five major consumer food and drink companies in order to understand the full picture of the transition away from plastic. The report reveals that the consequences of using plastic alternatives has not been properly assessed. For example, switching from single-use plastic to paper bags, as implemented at Morrisons, Tesco and Sainsburys, means manufacturing processes that require four times as much energy. Furthermore, glass bottles, thought to be more sustainable than plastic, are much heavier and so more polluting to transport. ‘Compostable’ packaging has also caused confusion among shoppers as such items actually require industrial composters. The report argues that more thinking needs to be done to assess the environmental impacts of materials proposed as alternatives to plastic. (Environment Journal, BBC)

The venture capital arm of oil giant BP has made a foray into the fast-expanding artificial intelligence (AI) market in China with a $3.6 million investment in energy management specialist R&B. R&B’s energy management systems apply AI analytics to predict, control and improve a building’s energy use. According to the company, its Software-as-a-Service platform processes data on the energy use of commercial and industrial buildings, formulating recommendations to boost energy efficiency, optimise performance, and lower carbon emissions. It aligns with BP Alternative Energy’s focus on increasing the oil giant’s clean technology portfolio, the firm said, highlighting how buildings account of for one third of the world’s energy consumption and with rapid growth underway across China’s commercial property sector R&B could play a significant role in curbing emissions. The investment also expands BP Ventures’ involvement in smart energy management, building on last year’s investment in UK-based AI firm Grid Edge. (Business Green)

Social media platform Twitter has said it will test new features that allow users to control who can reply to their posts or block replies entirely. “We want to help people feel safe participating in the conversation on Twitter,” the company said. The move comes as social media companies are under increasing pressure to address cyber-bullying. The firm has already launched a feature which allows its users to hide replies to their tweets. Twitter unveiled details of the experiment during a presentation at the annual Consumer Electronics Show, in Las Vegas. The new features, to be tested early this year, will allow users to select four different settings for replies: Global – allow anyone to respond, Group – allow replies from people the user follows, or mentioned, Panel – allow replies from people mentioned, Statement – not allow any replies. (BBC)

Goldman Sachs has become the first US company to become a member of three major initiatives for electric transport and smart and renewable energy use. The investment banking company has now joined EV100, EP100 and RE100, managed by environmental non-profit The Climate Group. Goldman Sachs was one of the first US companies to join RE100 and commit to 100 percent renewable power, during Climate Week NYC in 2015. This month’s RE100 Progress and Insights Annual Report shows the company has achieved 96 percent of the target and is on track to reach its 2020 goal. Now as an EV100 member, the bank is also committed to installing electric vehicles (EV) charging stations at its owned office locations, and in offices where Goldman Sachs is a tenant, to encourage EV charging installations and making it a criterion for site selection. Goldman Sachs also joins EP100 through the Net Zero Carbon Buildings pathway, occupying and owning only assets that are net zero carbon by 2030. (The Climate Group)