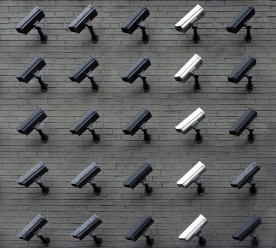 The head of fund manager Fidelity International has defended the firm’s investment in a controversial Chinese surveillance company accused of contributing to human rights abuses. Fidelity owns a big stake in Hikvision, whose technology has allegedly been used to monitor the Uighur Muslim minorities in China’s Xinjiang region. Anne Richards said the fund tried to ensure firms it backed were ethical. In October, the US government blacklisted the firm – among others – for allegedly supporting a “campaign of repression [and] mass arbitrary detention” of mostly Muslim minority groups. Hikvision is said to have provided cameras for “re-education camps” in Xinjiang, where about a million Uighurs are allegedly being detained. China says these camps are voluntary and designed to tackle extremism. But human rights groups say they are used to brainwash and punish inmates, sometimes violently – claims that China denies. Fidelity, which handles investments for clients in Europe, Canada, the Middle East and Africa and Asia, still owns tens of millions of dollars’ worth of shares in Hikvision. (BBC)

Some of the world’s biggest fossil fuel companies, including Russia’s state oil giant Rosneft, have been added to the London Stock Exchange’s “ethical” investment lists. The FTSE4Good indices, run by the London Stock Exchange Group’s FTSE Russell subsidiary, are marketed to investors interested in environmental, social and governance (ESG) issues. However, the LSE has refused to remove big polluting companies or the security company G4S despite allegations of systematic labour abuses across the world. At its latest semi-annual review earlier this month, FTSE Russell added the world’s 13th and 15th largest oil companies by market capitalisation, Rosneft and ConocoPhillips, to the FTSE4Good index. Rosneft Oil, Russia’s state oil company, produced 1.9bn barrels of oil in 2018. ConocoPhillips produced 468m in the same period. The FTSE4Good index rules explicitly ban coal firms, but the company also added Itochu Corporation, a Japanese conglomerate that mines coal as well as having interests including food, technology, textiles and machinery. However, a loophole in the rules means that this exclusion only applies to firms whose main business is coal production – letting through conglomerates. (The Guardian)

The highest court in the Netherlands has upheld a landmark ruling that defines protection from the devastation of climate change as a human right and requires the government to set more ambitious targets to cut greenhouse gas emissions as a result. Hailed as an “immense victory for climate justice”, the supreme court rejected the government’s appeal against earlier rulings, handing environmental activists a final victory in a gruelling six-year legal battle. The Dutch government will now have to cut emissions by at least 25 percent by the end of 2020 from benchmark 1990 levels. Dutch prime minister Mark Rutte said he guaranteed his government would do everything it could to reach 2020 target, without elaborating on possible measures. It is now more than four years since a court in The Hague first ordered emissions to be cut in a case brought by Dutch organisation Urgenda, which spawned similar legal challenges in courts around the world. (Independent)

British supermarket giant Tesco suspended a Chinese supplier of Christmas cards on Sunday after a press report said a customer found a message written inside a card saying it had been packed by foreign prisoners who were victims of forced labour. “We abhor the use of prison labour and would never allow it in our supply chain,” a Tesco spokesman has said. They immediately suspended the factory where the cards are produced and launched an investigation, they said. Tesco, Britain’s biggest retailer, donates 300,000 pounds a year from the sale of the cards to the charities British Heart Foundation, Cancer Research UK and Diabetes UK. The Sunday Times said the message inside the card read: “We are foreign prisoners in Shanghai Qingpu Prison China. Forced to work against our will. Please help us and notify human rights organisation.” The cards were produced at the Zheijiang Yunguang Printing factory, about 100 km (60 miles) from Shanghai Qingpu prison, Tesco said. (Thomas Reuters Foundation)

Geothemal energy market heats up with Climeon and Geo40 partnership

Swedish geothermal energy firm Climeon has joined forces with New Zealand minerals specialist Geo40 to develop a combined mineral extraction and power plant the two firms hope could pave the way for lower-cost renewable heat and power production. The strategic partnership is aimed at strengthening both firms’ geothermal capabilities and “opens up a wide range of global opportunities”, such as the potential to recover additional waste heat from existing geothermal power plants to create clean energy. Geo40 claims to have developed a technology to extract silica, which causes scaling, and other minerals from geothermal brine, the hot wastewater that remains from the process of high-temperature geothermal power production. By extracting the silica and other minerals including lithium, Geo40 claims its technology can cut operation costs for geothermal power stations while also opening up new revenue streams in markets which require these valuable minerals. In addition, meanwhile, Climeon envisages using the excess water filtered through Geo40’s technology in its heat power modules to produce clean electricity, and also to increase the output at existing geothermal power stations. (Business Green)