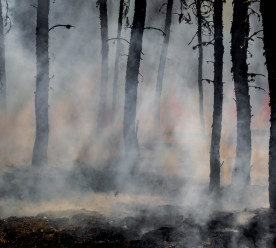 Fires are raging across Australia amid a heatwave which has produced the nation’s two hottest days on record back-to-back. Australia recorded its hottest day on record on Wednesday, with an average maximum temperature of 41.9C, beating the previous record by 1C that had been set only 24 hours earlier. Australia has been fighting wildfires across the country’s east coast for weeks, with blazes killing eight people and destroying over 700 homes. The magnitude of the heatwave and the unprecedented early arrival and severity of this year’s bushfire season has been linked to climate change. Dr Andrew Watkins, head of long-range forecasts at the Bureau of Meteorology, noted that climate change is the underlying driver behind the extreme events, with the country having warmed by just over 1C since 1910. Prime Minister Scott Morrison’s government has come under sustained pressure to defend its weak climate change policies, with activists calling out the role of federal officials in thwarting negotiations and lobbying coal at the recent UN COP25 summit on climate change. (The Guardian; Reuters; NBC News)

Toymaker Mattel has set its sights on ensuring all of its products are made from and packaged in 100 percent recycled, recyclable or bio-based materials within the next decade. Mattel said the new materials will cut waste and enable the material to be recovered and repurposed at the end of the toy’s lifetime. “Innovation is part of our DNA, and it is central to our work in environmental sustainability,” said Mattel’s president and chief operating officer Richard Dickson. The new 2030 goal expands on the firm’s existing sustainability principles, which recently saw it secure 93 percent of its paper and wood fibre from Forest Stewardship Council (FSC) sources, surpassing its 2018 target of 90 percent. Mattel has also adopted a standardised recycling label on its products, and established a new Environmental Sustainability Council within the company to help drive further green product innovation. Mattel’s first sustainably-made toys under the new target will be made available early next year. (Business Green)

The UK’s fashion industry is not cutting waste fast enough to hit its December 2020 target of a 3.5 percent reduction, the circular economy expert charity, the Waste and Resources Action Plan (WRAP), has admitted. According to a progress report from the WRAP’s ‘Sustainable Clothing Action Plan 2020’ (SCAP 2020) commitment, supply chain waste has only dropped by 1.4 per cent against the 2012 baseline. SCAP 2020 is a voluntary initiative by WRAP and the fashion sector to reduce carbon, water and waste across the life cycle of clothing. Although more progress has been made on cutting water use and carbon emissions, the industry is set to miss its waste targets without urgent action. WRAP cited population growth, rising consumption levels, lack of collection infrastructure and the length of time people kept clothes as reasons for the slow progress on waste. (Business Green)

A coalition of aid groups, including the British Red Cross, Cafod and Oxfam GB, has warned UK Prime Minister Boris Johnson that plans to abolish the Department for International Development would suggest Britain is “turning our backs on the world’s poorest people”. One climate diplomacy expert said it would be “political suicide” to merge DfID with the Foreign Office in 2020, the same year the UK is hosting the UN climate summit, since the move would tie up senior civil servants when they were most needed to tackle the response to the climate crisis. The aid watchdog, the Independent Commission for Aid Impact, has previously warned that the redistribution of the aid budget had resulted in a growing focus on larger, middle-income countries which risked the principle of “leaving no one behind”. In a statement, more than 100 charities specialising in humanitarian relief, girls’ education, global health, clean water and sanitation said “merging DfID with the FCO would risk dismantling the UK’s leadership on international development and humanitarian aid”. (The Guardian)

Renewable electricity generation in the UK between July and September has outstripped the share coming from gas for the first time, the government’s latest energy trends data confirmed. Renewable technologies produced 38.9 percent of the total over the three-month period, compared with 38.8 percent from gas. Generation from gas fell by 1.2 per cent compared with Q3 2018, while power from renewables continues to climb. Business Secretary, Andrea Leadsom, tweeted that she was “delighted” with the trends, which also saw coal plummet to one per cent of the UK’s energy generation, a 61 per cent fall from Q3 2018. According to the data, increases in output were seen for all categories of renewables, but were particularly substantial for wind and solar, jointly up 22 percent, as well as for hydrogeneration, which rose by 58 percent. They noted that the growth of power from renewables was driven both by a 7.2 percent rise in capacity, and favourable weather conditions, particularly for offshore wind generation. (Business Green)