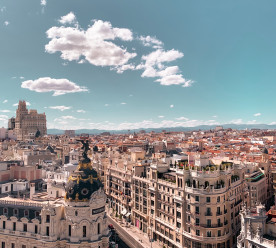 COP25 talks open as ‘point of no return’ in sight

Political leaders and climate diplomats are meeting in Madrid for two weeks of talks amid a growing sense of crisis. According to United Nations (UN) Secretary General António Guterres, “the point of no return is no longer over the horizon”. The conference of the parties, or COP25, was due to be held in Chile but was cancelled by the government due to weeks of civil disturbances. Spain then stepped in to host the event, which will see 29,000 attendees over the two weeks of talks. Speaking ahead of the meeting the UN secretary general said the climate crisis was imminent and political leaders had to respond. Almost every country has now signed the Paris climate agreement and under the terms of the pact they will all have to put new climate pledges on the table before the end of 2020. Meanwhile, Save the Children says that climate shocks have left millions in Africa facing hunger. The charity says 33 million people are at emergency levels of food insecurity due to cyclones and droughts.  (BBC)

Bank of England governor Mark Carney has been appointed United Nations Special Envoy for Climate Action and Finance. Mr Carney will take up his new post once his term as governor ends on 31 January 2020. The announcement comes ahead of the UN COP25 conference. Mr Carney said the UN climate change conference “provides a platform to bring the risks from climate change and the opportunities from the transition to a net-zero economy into the heart of financial decision-making”. The special envoy post is a pro bono position that is undertaken essentially for free – the UN will pay Mr Carney $1 a year once he steps down as governor of the Bank of England. Billionaire former New York Mayor Michael Bloomberg was the last person to hold the post. He worked with the UN on climate change-related issues from 2014 to 2019. Mr Carney will be tasked with mobilising private finance to take climate action and help transition to a net-zero carbon economy for COP26 meeting in Glasgow in November 2020. (BBC)

EU antitrust regulators are investigating Google‘s collection of data, the European Commission has said, suggesting the world’s most popular internet search engine remains in its sights despite record fines in recent years. Competition enforcers on both sides of the Atlantic are now looking into how dominant tech companies use and monetise data. The EU executive said it was seeking information on how and why Alphabet unit Google is collecting data. The EU’s focus is on data related to local search services, online advertising, online ad targeting services, login services, web browsers and others. European Competition Commissioner Margrethe Vestager has handed down fines totalling more than 8 billion euros to Google in the last two years and ordered it to change its business practices. Google has said it uses data to better its services and that users can manage, delete and transfer their data at any time. (Thomas Reuters Foundation)

The number of insurers withdrawing cover for coal projects more than doubled this year and for the first time US companies have taken action, leaving Lloyd’s of London and Asian insurers as the “last resort” for fossil fuels, according to a new report, by global NGO network Unfriend Coal. The report, which rates the world’s 35 biggest insurers on their actions on fossil fuels, declares that coal – the biggest single contributor to climate change – “is on the way to becoming uninsurable” as most coal projects cannot be financed, built or operated without insurance. Ten firms moved to restrict the insurance cover they offer to companies that build or operate coal power plants in 2019, taking the global total to 17, said the Unfriend Coal campaign, which includes 13 environmental groups such as Greenpeace, Client Earth and Urgewald, a German NGO. The first insurers to exit coal policies were all European, but since March, two US insurers – Chubb and Axis Capital – and the Australian firms QBE and Suncorp have pledged to stop or restrict insurance for coal projects. (The Guardian)

Japanese activists on Monday called for drastic steps by the government, companies and universities to stamp out sexual harassment of job-hunting students, a problem they said lurks in the shadows because victims fear speaking out. Although the labour ministry drafted guidelines in October to prevent power harassment in workplaces, it said only that such measures were “desirable” for students and other non-employees. Despite some diversification in recruitment, many Japanese firms tend to hire new graduates, who begin the job hunt while still at university. Many feel too vulnerable to denounce harassment, members of Safe Campus Youth Network (SAY), a volunteer group of professors and students at six Tokyo universities, told a news conference. The guidelines against power harassment are expected to be finalised this month after a period of public comment but have come under fire from some experts who say the definition of power harassment is too narrow. (Thomson Reuters)