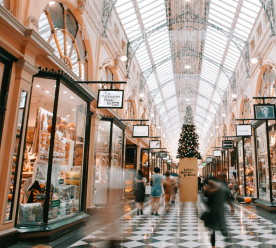 The think tank, Green Alliance, has released new research indicating 80 percent of ‘Black Friday’ purchases in the UK end up either in landfill, incineration or, at best, low quality recycling. This results in vast amounts of materials dropping out of the UK economy each year, it says. Some 80 percent of household plastics and textiles are landfilled or incinerated, while nearly all electronic waste is used as low-quality recyclate. Accompanying research from online spare parts retailer eSpares suggests 1.4 million tonnes of electronic are sent to landfill every year. Green Alliance argues that the UK needs a fundamental redesign of how it handles waste and resources to disrupt this linear consumption pattern. They called for a shift to a more circular system of consumption that would cut waste and emissions and provide people with better quality, longer-lasting goods. In a backlash against Black Friday, a day of sales and discounts emerging in the US, ethical brands including Patagonia and Everlane both confirmed this week they will be increasing their donations to ethical causes. (Business Green)

As ‘Black Friday’ sales sweep across thousands of shops, many corporates are shunning the biggest sales event of the year. Some retailers including Asda, Monki and Ikea are deliberately avoiding any models which could whip shoppers into a spending spree, announcing they will not offer discounts at Black Friday. Moreover, many other retailers are going one step further and using the occasion to champion resource efficiency, social sustainability and environmental conservation, rebranding the day ‘Green Friday’. Examples include American clothing retailer Everlane, who will be donating $10 from every order to a non-profit talking ocean issues, and UK shoe brand Allbirds, who is repurposing its store space to host workshops to raise awareness on overconsumption. Outdoor retailer Patagonia, which frequently makes a stand against Black Friday deals, has this year marked the day by matching all donations made to grassroots organisations working to preserve and restore nature. It will continue to do so until 31 December. (edie)

The European parliament has declared a global “climate and environmental emergency” as it urged all EU countries to commit to net zero greenhouse gas emissions by 2050. The statement came as scientists warned that the world may have already crossed a series of climate tipping points, resulting in “a state of planetary emergency”. Intended to demonstrate Europe’s green credentials days before a crucial UN climate conference in Madrid, the move also ratchets up pressure on Ursula von der Leyen, the incoming president of the European commission, who declared this week that the EU would lead the fight against “the existential threat” of the climate crisis. However, environmental campaigners said the declaration was not backed by sufficient action. “Our house is on fire. The European parliament has seen the blaze, but it’s not enough to stand by and watch,” said Greenpeace’s EU climate policy adviser, Sebastian Mang, shortly before the vote to declare a climate emergency. In a separate vote, MEPs backed a resolution stating that current EU climate targets were “not in line” with the 2015 Paris climate agreement. (The Guardian)

Criticisms are mounting against The Internet Society (ISOC), a US non-profit, for the sale of the ‘.org’ domain to private equity firm Ethos Capital, over concerns that it will lead to censorship and increased prices. The .org internet domain is a potent symbol for non-profit groups around the world, conveying such a strong sense of rectitude that some organisations have even included it in their offline names. There are more than 10 million .org domain names registered worldwide. Ethos has pledged to set up a Stewardship Council to uphold the “core founding values and provide support through a variety of community programs”. However, the sale has drawn warnings of price-gouging, as a new financial owner looks to maximise the returns from the registry. This week, AccessNow, an advocacy group that promotes an open internet, led other NGOs in calling on ICANN, which retains ultimate authority for the smooth functioning of internet addressing, to block the sale. (FN London; Financial Times*)

Twelve EU countries, including Ireland, have blocked a proposed new rule that would have forced multinational companies to reveal how much profit they make and how much tax they pay in each of the 28 member states. The proposed directive was designed to shine a light on how some of the world’s biggest companies – such as Apple, Facebook and Google – avoid paying an estimated $500 billion a year in taxes by shifting their profits from higher-tax countries such as the UK, France and Germany to zero-tax or low-tax jurisdictions including Ireland, Luxembourg and Malta. The vote came more than three years after the European commission promised to expose multinational corporations’ tax avoidance measures following the Panama Papers revelations. The proposal would have made country-by-country reporting mandatory for companies with an annual turnover of more than €750 million. Elena Gaita, a senior policy officer at anti-corruption charity Transparency International, said “it’s an outrage that member states have once again put the interests of big business above those of citizens”. (The Guardian)

Image source: person walking inside building near glass by Heidi Sandstrom on Unsplash.