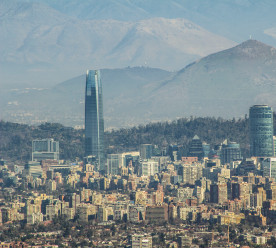 Chile’s president, Sebastián Piñera, has announced that Chile will no longer host the COP25 climate summit in December. Piñera said the government had taken the “very difficult decision” to cancel the summit as it seeks to bring an end to the rolling series of street protests and clashes that have escalated in recent weeks, which saw over a million civilians bring Santiago to a halt protesting inequality and the rising cost of living. Just over a week ago the government declared a state of emergency, but there has been little sign of public discontent subsiding, with reports of violent clashes between protestors and Chilean armed forces that had been called in to tackle the unrest. The United Nations Framework Convention on Climate Change (UNFCCC), the UN body which oversees the annual talks, said it was “currently exploring alternative hosting options” for the summit. It currently remains unclear whether another host can enable COP25 to go ahead as planned, or whether the talks will be delayed. (Business Green)

Social media platform, Twitter, will ban all political advertising, the company’s CEO has announced. The new policy will come into effect on 22 November and will apply globally to all electioneering ads, as well as ads related to political issues. The announcement comes as social network, Facebook, is embroiled in a controversy over its decision to exempt ads by politicians from third-party factchecking and from a policy that bans false statements from paid advertisements. This follows from hundreds of Facebook employees that called on Mark Zuckerberg to change its controversial stance. Twitter co-founder and CEO, Jack Dorsey, called for “forward-looking political ad regulation”, noting that transparency requirements that have been proposed by US lawmakers are “progress but not enough”. He stated that “the internet provides entirely new capabilities, and regulators need to think past the present day to ensure a level playing field”. On the other side of the debate, Trump’s campaign manager, Brad Parscale, called Twitter’s decision “another attempt by the left to silence Trump and conservatives”. (The Guardian)

Telecommunication company, AT&T, and General Electric Co. are among 316 companies in the S&P 500 index disclosing some or all of their election-related spending or specifying that they ban such spending, according to an annual analysis. The average disclosure score for a S&P 500 company increased to 47.1 percent in 2019 from 44.1 percent a year earlier, said the study, which was authored by the non-profit Centre for Political Accountability and the University of Pennsylvania’s Zicklin Centre for Business Ethics Research. Such spending includes contributions to candidates, parties, and committees, as well as funding via trade associations and other politically active groups. Political spending disclosure has become mainstream in recent years amid investors’ advocacy and companies’ increased recognition of reputational risks that can come from their connections to politics. The study scores companies based on how much political spending information they provide publicly, with 2019 showing the largest year-over-year increase in the number of top scorers. (Bloomberg)

Scepticism about the value of sustainable investment strategies has fallen by almost 50 percent in just three years, according to the latest attitude survey conducted by global investment management firm Schroders. The study stated the proportion of investors globally who do not “believe in sustainable investment” has fallen from 20 percent in 2017 to 11 percent this year. The decline was most striking in Latin America, where the total number of sceptics plummeted almost threefold, from 29 to 12 percent. Sustainable investment funds and products have long been ignored by a widespread market belief that they deliver weaker financial returns than mainstream products. In a parallel development, the study found climate change is now considered one of the most important areas of engagement among investors, overtaking traditional touchstone issues such as corporate strategies and accounting quality. This follows calls from Paul Polman for the private sector to engage with the world’s social and environmental challenges, such as corruption, diversity and labour rights all also saw an uptick in their significance as stewardship topics. (Business Green)

International conservation charity Zoological Society of London (ZSL) has called on global businesses to step up scrutiny on palm oil, as a new analysis by the charity reveals that the majority of the world’s most significant palm oil companies do not know where their palm oil originates from. Analysis of 99 producers, processors and traders of palm oil found that, although more than two-thirds of companies have zero deforestation commitments and more than half of companies have commitments to respect the rights of local communities, most companies do not have a full understanding of the origin of all palm oil in their supply chain or a robust monitoring system in place to ensure palm oil meets their sustainability commitments. However, the study emphasized that a straight boycotting of palm oil products is not the way forward to protect wildlife or humans involved in the industry, as it is one of the most efficient vegetable oil crop in terms of yield per hectare, and a significant source of income in producing countries. (Spott)