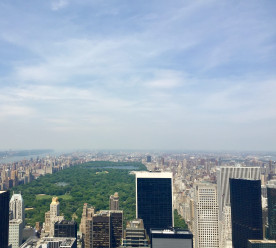 New data assessing the social media of the world’s leading CEOs suggests that climate change has become a prominent topic in the most powerful executive boardrooms. This is the implication of new research released yesterday by data and analytics firm Global Data that shows climate change is now one of the most frequently mentioned themes among the world’s leading CEOs on Twitter. Its CEO Influencer platform, which captures the Twitter discussions of over 300 global CEOs, found the number of conversations referring to climate change jumped by 200 percent from the second to the third quarter of 2019. GlobalData’s Influence Research Head, Amandeep Gill, explained that CEOs principally used Twitter to discuss climate change’s broad impact on the economy, health, and governance. The increase is likely to be linked to the growing public demand for increased climate action this year by groups such as Extinction Rebellion and the Global Climate Strikes. (Business Green)

Women are paid just £380,000 on average over their lifetimes compared with £643,000 for men, according to official figures that reveal the scale of Britain’s gender pay gap. The Office for National Statistics figures show huge inequality between men and women even at the highest levels of educational attainment. It said women with a master’s or PhD degree still made one-third less over their lifetimes than men with the same qualifications. It said there had been a small improvement over the last 15 years: “The gap in average lifetime earnings for men and women has narrowed, with women now receiving, on average, 59% of men’s average lifetime earnings; this is up from 56% in 2004”. The findings are contained in an ambitious attempt by the ONS to assess Britain’s entire “human capital” in financial terms. It said that even after adjusting for hours worked, women were paid about a fifth less than men over their lifetimes. (The Guardian)

Hundreds of Facebook employees are petitioning CEO Mark Zuckerberg to change the company’s divisive rules on political advertising that allow politicians to make false statements. More than 250 workers at the social networking giant have signed an internal letter calling on the company’s leadership to change course on its stance on political ads. “Free speech and paid speech are not the same thing,” the letter reads, according to a copy of it published by the New York Times. Facebook has recently decided to exempt politicians’ advertisements from its broader rules that ban falsehoods in ads — effectively allowing politicians to spread deliberate falsehoods on Facebook’s advertising platform without repercussions. The decision has proved intensely controversial, with Democrats warning that it could impact the 2020 election, even as Zuckerberg defends the position on free speech grounds. The signatories stated that they strongly object to this policy, outlining that it does not protect voices but allows politicians to weaponize the platform. (Business Insider)

Gupta steel empire aims to be carbon neutral by 2030

Liberty House, the industrial conglomerate, has set a goal to become the first “carbon neutral” steelmaker by 2030 as the industry faces pressure to try to tackle global warming. The group, owned by steel billionaire Sanjeev Gupta, said it was aiming for net carbon neutral status, which means any CO2 emissions are balanced with offsetting measures, through investments in new equipment and exploring new production technologies. Steel is one of the largest industrial sources of greenhouse gases and responsible for roughly 7 to 9 percent of all direct emissions from fossil fuels, according to the World Steel Association. With public awareness about climate change rising, several European producers of the metal are seeking to reduce their carbon footprint. Liberty plans to build on its so-called “greensteel” strategy, which centres on electric arc furnaces that melt scrap, and renewable energy. Although not a new technology, arc furnaces do not consume coal, unlike polluting blast furnaces that produce metal from raw materials. (Financial Times)*

Telecoms company O2 has received more than three million devices as part of a trade-in scheme to boost the recyclability of smartphones, a move that has stopped more than 450 tonnes of phone-related waste from going to landfill. Through the initiative, customers can trade in old devices for cash. O2, in partnership with recycling service provider Redeem, has paid out £226 million in exchange for used devices. All traded-in devices are data-wiped and reused, or recycled, with 95 percent of them resold back into the market. O2 has claimed that most are resold within the UK, reducing carbon emissions from transport as a result. The company’s service has grown in popularity over the last couple of years, with an average of £500,000 paid out each week as part of the trade-in service. It forms part of a wider move to improve the circularity of the company’s value chain. (edie)