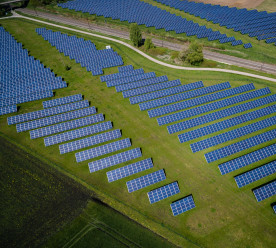 Global supplies of renewable electricity are growing faster than expected and could expand by 50 percent in the next five years, powered by a resurgence in solar energy, according to the International Energy Agency (IEA). In its latest report, the IEA found that solar, wind and hydropower projects are rolling out at their fastest rate in four years. The report predicts that by 2024, a new dawn for cheap solar power could see the world’s solar capacity grow by 600GW, almost double the installed total electricity capacity of Japan. Overall, renewable electricity is expected to grow by 1,200GW in the next five years, the equivalent of the total electricity capacity of the US. The resurgence follows a global slowdown last year, due to falling technology costs and rising environmental concerns. However, The IEA expects solar energy to play the biggest role in jumpstarting fresh growth in global renewable energy because falling costs are already below retail electricity prices in most countries. (The Guardian)

Top female executives called for legal quotas for more women in the boardroom in a push to improve gender equality at UK listed companies. Inga Beale, former head of Lloyd’s of London, and Tiina Lee, Deutsche Bank’s UK and Ireland chief executive, demanded the moves at the Financial Times’ ‘Women at the Top’ conference in London. Ms Beale suggested framing quotas as “40 percent men, 40 percent women” to stress their focus on equality and boost their appeal. Criticising her former employer, Beale said “I changed the Lloyd’s executive committee to 50/50 gender balanced. All the women I hired have now left”. Those advocating quotas on gender also noted that similar action was needed on race, sexuality and class. According to Cranfield University, 32 percent of FTSE 100 directors were women as of June 2019, up from 29 percent in 2018. All FTSE 100 companies have at least one female director. (Financial Times*)

BHP, the world’s largest miner, has signed four renewable energy contracts to supply all its Chilean copper operations beginning in 2021, cutting energy costs by 20 percent. Miners, which often use fossil fuels as the energy source in their operations, are shifting to renewable generation as the cost of wind and solar power drops, while social and shareholder pressure to address climate change mounts. They will displace 3 million tonnes of carbon dioxide from 2022 compared with fossil fuel-based contracts, equivalent to annual emissions from 700,000 combustion-engine cars. Chile has taken a lead in renewable power with costs for wind and solar energy plunging. BHP, Anglo American and other miners also say they are seeking to reduce water use, especially as many mining operations are in arid areas. In Chile, BHP said it was working to eliminate the depletion of aquifers in the desert regions where it operates. It has a goal not to source water from aquifers by 2030 and is instead investing in desalination plants. (Reuters)

Personal care brand Dove has committed to removing all non-recycled plastic from certain bottle lines by the end of the year and debuted a new, plastic-free packaging format for its beauty bar soap. The moves form part of the Unilever-owned brand’s overarching commitment to mitigate the use of virgin plastics annually by 2025. On bottles, Dove will launch 100% post-consumer recycled plastic bottles across its markets in Europe and North America by the end of 2019. Dove will also launch plastic-free, paper-based boxes for single-format bars by the end of 2020. Each of these moves falls under one of the three pillars of Unilever’s “no, better, less” framework for plastics packaging. The moves from Dove have been welcomed by circular economy charity, WRAP, which counts Unilever as one of the 130+ members of its UK Plastics Pact. WRAP’s strategic engagement manager, Helen Bird, believes consumers must now take responsibility to change behaviours. (edie)

UK backing for a World Bank fund to help poor countries will hinge on reforms at the global institution to channel more money into tackling the climate crisis, improving gender equality and ensuring vulnerable countries can pay their debts. Speaking in Washington, the international Development secretary, Alok Sharma, said the size of the UK’s contribution to the Bank’s concessional loan facility for the world’s least-developed countries would depend on a more focused anti-poverty approach. The Bank is currently seeking contributions from rich countries for the 19th replenishment of the International Development Association (IDA 19), which provides soft loans and grants for countries in financial difficulty. A spokesperson for the World Bank said: The proposed policy package in IDA 19 will direct more funding toward people in fragile and conflict-affected situations, and will reaffirm our commitment to projects that benefit the climate and promote greater inclusion (The Guardian)