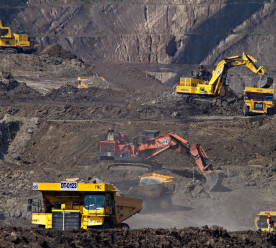 RWE aims to be carbon neutral by 2040

RWE, Europe’s biggest producer of carbon dioxide emissions, has pledged to become carbon neutral by 2040. The move by RWE highlights a transformation for the German utility company, which has long been one of the prime targets of climate activists and that currently runs some of the largest and dirtiest coal power stations on the continent. The pledge comes just weeks after European regulators signed off on a €43 billion asset swap deal between RWE and its rival Eon that will reorder the German energy market. Under the terms of the 2018 deal, RWE will take over all the renewables assets of both Eon and RWE subsidiary, Innogy, that will be acquired by Eon. The transaction will make RWE the third-largest renewables group in Europe. RWE has said it plans to invest €1.5 billion a year in additional renewables capacity and aims to close all coal power stations by 2040. However, environmental campaigners have voiced criticism saying they must be closed long before 2040 for Europe to achieve its climate goals. (Financial Times)

Johnson & Johnson has reached a $20.4 million agreement to settle opioid claims brought by two Ohio counties, becoming the fifth drug maker to avoid the first federal trial that attempts to hold the pharmaceutical industry accountable for the drug scourge. The company – which made a fentanyl patch and two versions of an opioid tablet – did not admit wrongdoing, but will pay $10 million in the case, plus additional contributions worth $10.4 million, for its role in the crisis. It said in a statement that it was settling “to avoid the resource demands and uncertainty of a trial as it continues to seek meaningful progress in addressing the nation’s opioid crisis.” The agreement settles two federal lawsuits but is intended to test the process for some 2,300 cases filed by cities, counties and tribes nationwide, that have been consolidated in federal court. Johnson & Johnson are also appealing an $572 million order against the company for fuelling Oklahoma’s opioid crisis.(NY Times, Insurance Journal)

An undercover investigation by Rainforest Action Network has found that global snack companies including Unilever, Nestlé, and Mars are sourcing palm oil from plantations illegally developed in Indonesia’s Leuser Ecosystem, one of the world’s most valuable conservation areas. The ecosystem is home to critically endangered elephants, rhinos, orangutans, and tigers. The investigation found that two palm oil traders that supply the firms— Musim Mas and Golden Agri-Resources (GAR)—have been sourcing from plantations that have been deforesting the nationally protected Rawa Singkil Wildlife Reserve in Sumatra’s Singkil-Bengkung region. PepsiCo, Mondelêz, General Mills, Kellogg’s and Hershey’s were also named in the investigation. The findings undermine long-standing commitments made by the likes of Mars and Unilever to distance themselves from suppliers that fell rainforests to produce palm oil, an ingredient found in about half of all supermarket products. The report, which is part of the website Leuser Watch, also points to the banks that are financing the palm oil traders, such as Singapore’s OCBC Bank, Japan’s Mitsubishi UFJ Financial Group, and Dutch bank ABN Amro. (Eco-Business)

The fund management sector is facing new criticism over its widening gender pay gap, after a new report says there are signs of “resentment” from professionals who have dismissed diversity as a matter of political correctness. The average gender pay gap for the sector has increased by 0.8% to 31% since mandatory reporting was introduced in the UK two years ago. That is second only to the banking industry, where women earn about 32% less than men on average. It is the only sector among the five worst performers – which include banking, insurance, property and travel – that failed to narrow the gap, according to the report by PwC and the industry’s Diversity Project group. The report found many professionals were still sceptical of evidence showing that diversity improved business performance by boosting innovation and resulting in better returns. The report also turns the spotlight on investment management firms, which are starting to take an active stance on the diversity and sustainability policies of companies they have invested in. (The Guardian)

Business leaders have complained of being hindered by political uncertainty and market constraints in their efforts to fight poverty, inequality and other societal problems by 2030, research showed as world leaders met to discuss the United Nations’ global goals. Only one in five chief executives thinks business is playing a critical role in the wide-ranging development goals, according to a study by the United Nations Global Compact, a network of businesses, and consulting company Accenture Strategy. The 17 Sustainable Development Goals with 169 targets agreed by the 193 UN member states set out an ambitious “to-do” list tackling conflict, hunger, land degradation, gender inequality and climate change by 2030 but assessments of their progress have been bleak. The study of about 1,000 chief executives from 21 industries and 99 countries found less than half reported integrating sustainability into business operations. Four in 10 said political uncertainty was slowing or stalling their efforts, and a third said the closing of global markets and limits on free trade were hindrances. (Eco-Business)

Image Source: photography of excavators at mining area by Dominik Vanyi on Unsplash.