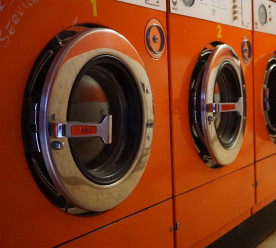 EU brings in ‘right to repair’ rules for appliances

From 2021, firms will have to make appliances longer-lasting, and supply spare parts for machines for up to 10 years, according to new standards being adopted across the European Union. The rules apply to lighting, washing machines, dishwashers and fridges. The legislation has been prompted by complaints from consumers infuriated by machines that break down just out of warranty. Forced to buy replacements, this creates waste and fuels global warming through the greenhouse gases created in the manufacturing process. It is estimated that the new standards will ensure that appliances have a longer life and be more energy efficient. The move could directly save €20 billion on energy bills per year in Europe from 2030 onwards, equivalent to 5 percent of EU electricity consumption and save nearly 50 million tonnes of CO2 emissions. Campaigners for the “right to repair” say they do not go far enough as only professionals, will be able carry out the repairs. However, manufacturers said this would raise questions about risk and liability. (BBC)

Nestle and P&G say they will miss 2020 deforestation goals

The world’s two largest consumer goods companies, Nestlé and Procter & Gamble (P&G), have said they will fall short of goals to only use ingredients that do not contribute to deforestation in their products by 2020. Nestlé “made a commitment to no-deforestation” by 2020 in 2010, but now predicts that “over 90 percent of key agricultural commodities to be verified deforestation-free”. P&G aimed to reach a “zero deforestation supply chain by 2020” but also said they would fail to meet the target. Environmental groups, including Greenpeace, have previously expressed scepticism in the ability of these consumer goods companies to fulfil their promises. Hundreds of other companies have made 2020 zero deforestation pledges, following encouragement from the Consumer Goods Forum (CGF). However, Ignacio Gavilan, CGF’s director of sustainability, has said that companies are underestimating the increasing demand for consumer goods and lax government forest regulations. (Reuters)

Siemens and UK100 tee up £100 billion for local climate action

German energy and infrastructure giant, Siemens, has partnered with UK100 network of mayors and local council leaders to drive the development of £100 billion worth of clean energy projects across the UK. The two organisations plan to work with central government to clear the way for a new wave of clean energy projects and accelerate the UK’s progress towards net zero emissions. They have identified £100 billion of potential clean energy projects across the UK but only a small proportion are currently ready for the market, with many facing barriers to development, such as planning issues and access to finance. A series of studies has shown that renewable and energy efficiency projects can deliver major cost savings. However, cash-strapped local councils have struggled to access the finance needed to fund new projects while cuts to renewables subsidies have further slowed market development. Under the initiative, financing for the projects will come from local authorities, private capital, and government investment and deliver projects at “significant commercial scale”. (Business Green)

Wealthy countries including the United States, Germany and Britain spent less on aid for humanitarian crises last year, even as the United Nations said it was dealing with unprecedented need, research has showed. According to the yearly “Global Humanitarian Assistance” report, the United States, the world’s biggest donor of humanitarian aid, cut its spending by 6 percent or $423 million in 2018, while Germany and Britain both spent 11 percent less than in 2017. That was despite a record $28.3 billion requested through appeals coordinated by the United Nations, which deemed more than 200 million people to need humanitarian aid. Dan Coppard, Director of Research and Analysis at Development Initiatives, the independent international development organisation that produced the report, expressed the need “to track the stance of these three large donors very closely and make sure it’s not the start of an ongoing trend”. (Thomson Reuters Foundation)

Prudential fined £24 million over lack of transparency in annuities sales

Prudential, the UK insurer, has been fined nearly £24 million by the City watchdog for failing to treat tens of thousands of retiring customers fairly after incentivising sales staff with large bonuses and spa breaks. The Financial Conduct Authority (FCA) said that between 2008 and 2017, Prudential failed to ensure that customers looking to turn their pension pot into an income — or an annuity — were properly informed that they might find a better deal from a rival provider. The insurer is reviewing more than 180,000 annuity sales and paying compensation to customers who did not secure the best deal. It has so far offered £110 million in redress to 17,240 customers, which includes backdated payments on their annuities and uplifts to their income. The total bill for customers affected would amount to roughly 250 million, said the FCA. Prudential said they are sorry for the failings in their annuity business and the detriment caused to their customers. (Financial Times)*