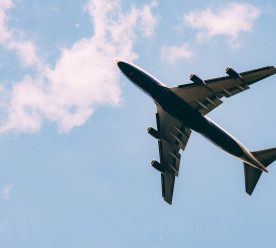 British holiday company Thomas Cook has collapsed – resulting in the loss of more than 1,000 jobs in Peterborough, where the company is located. The UK Civil Aviation Authority (CAA) announced that the 178-year-old tour operator has “ceased trading with immediate effect” after last-ditch rescue talks failed. The company’s collapse also means more than 150,000 British holidaymakers who are currently abroad will need to be repatriated back to the UK, with the CAA and the government aiming to get them all home by October 6. In order to get customers home, the government have now hired dozens of planes with flights due to start on Monday. Operators including easyJet and Virgin have supplied some aircraft, with jets coming from as far afield as Malaysia. Thomas Cook employed around 9,000 people in the UK – including 1,000 at its Lynch Wood headquarters in Peterborough. They also operated around 600 high street stores across the country.  (ITV)

130 banks worth $47 trillion to align with Paris Agreement

More than 130 global banks, collectively holding $47 trillion in assets, have pledged to align their businesses with the Paris Agreement and the Sustainable Development Goals (SDGs) as part of a new UN initiative to scale-up the financial industry’s contribution to climate action worldwide. Banks representing around one third of the entire global banking sector, including major names such as BNP Paribas, Santander and Barclays, have signed up to the ‘Principles for Responsible Banking’, which were officially launched ahead of this week’s crucial UN Climate Summit in New York. By signing up to the Principles, the 131 banks have all promised to strategically align their business with the goals and the commitment to maintain global average temperatures ‘well below’ 2oC of warming by the end of the century. Signatories must also align their strategies with the UN SDGs, which feature 17 headline targets on sustainable development to be achieved worldwide by 2030 on issues such as climate action, economic growth, inequality, poverty, and clean energy. (Business Green)

Tech giant Apple is claiming to have developed the first smartphone to use 100 percent recycled rare earths in its new iPhone. A key component of its new models, the Taptic Engine, contains only recycled rare earth materials, representing around a quarter of the total rare earth elements used in a new iPhone. Lisa Jackson, Apple’s vice president of environment, policy and social initiatives, said the devices represented a major breakthrough for the sector. Through reusing these materials, Apple claims it is avoiding the mining of more than 280,000 tonnes of bauxite, and more than 34,000 tonnes of tin ore over the next year. The innovation is a step towards the company’s long-term goal to make its products using only recycled and renewable materials. It has a strategy to create circular supply chains, and last year launched its disassembly robot, ‘Daisy’, to help streamline its recycling processes. (Business Green)

Companies representing around 30 percent of the total global milk market have come together to streamline and enhance their sustainability processes. The Sustainable Dairy Partnership (SDP) formally launches today and comprises 22 farmers cooperatives, processors, buyers, and retailers, including industry giants such as Danone, Fonterra, Friesland Campina, Mars and Nestlé. Companies in the partnership have committed to buyer programmes to cut down on excessive farm audits and embracing a range of sustainability best practices. It has been led by the Sustainable Agriculture Initiative (SAI) Platform, which acknowledged the dairy industry was facing multiple challenges as it seeks to curb its environmental impacts. The SDP helps dairy processors assess where they are in terms of addressing sustainability and measures their impact. All participants of the partnership will be required to tackle deforestation, animal welfare, human rights, and compliance with local legislation. (Business Green)

Social media platform Facebook says it has suspended tens of thousands of apps as part of an investigation it launched in the wake of the Cambridge Analytica data harvesting scandal. The suspended apps were associated with about 400 developers, it said, but not all the apps posed a threat to users. Some apps were banned completely for reasons including inappropriately sharing data obtained from Facebook or making data publicly available without protecting people’s identity. The company came under huge pressure in 2018 after it was revealed that Cambridge Analytica had accessed tens of millions of users’ data without permission. The political consultancy firm is alleged to have used this data – harvested by a personality quiz – to target political advertising. Facebook was fined $5 billion in July by the US Federal Trade Commission, in what was believed to have been the biggest ever fine imposed on any company for violating consumers’ privacy. Facebook is now seeking to improve its privacy safeguards and its image having faced lawsuits and international criticism from the scandal. (BBC)

Image Source: low angle photography of airplane on the sky by Jordan Sanchez on Unsplash.