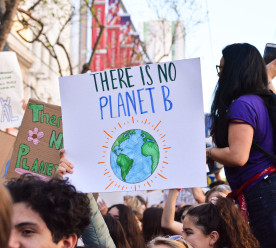 Patagonia, Sodastream and Allbirds have become the latest big brands to announce plans to shut down their operations to allow employees to join the Global Climate Strike, organised by a host of green groups including 350.org, Greenpeace and Extinction Rebellion. Most Patagonia stores and offices are closed today but they have also announced the launch of a major advertising campaign to promote climate action by urging the public to join the climate strike. Sodastream has shut down its head office and e-commerce operations today in support of the strike. The firms are the latest in a flurry of big companies to announce similar moves, including Burton, Ben & Jerry’s, Lush Cosmetics. Meanwhile, more than 2,100 Australian companies have also pledged to close their doors, take long lunches or give employees the day off to attend the climate strike, following a campaign by ethical investment fund Future Super. Over 6,000 websites are also striking, including Tumblr, Imgur and WordPress. These websites are donating ad space, spreading the world on social media, and adding a banner to their websites in solidarity with Greta Thunberg and other young people striking for climate change.  (Business Green, edie, Sydney Morning Herald, NBC News)

Amazon will become the first signatory of a newly formed “Climate Pledge,” a pact announced by company founder and chief executive Jeff Bezos on Thursday to meet the goals of the Paris climate agreement 10 years early. Speaking in Washington with former UN climate chief Christiana Figueres, Bezos said the pledge would require companies to implement decarbonisation strategies in line with the Paris agreement and calls on signatories to be at net zero carbon across their businesses by 2040. Any remaining carbon emissions would be neutralised with offsets. The announcement comes just a day before more than 1,000 Amazon employees plan to walk off the job to protest the company’s environmental track record. The walkout is part of the larger global climate strike that includes more than 800 events in the United States alone. To help meet its goal, Bezos said Amazon was ordering 100,000 electric delivery trucks from Rivian, a Michigan-based company that Amazon invested in this year. Bezos said that climate change had outpaced even the serious predictions the scientific community made five years ago. (Washington Post, New York Times)

Most of the public recognise the climate crisis as an “emergency” and say politicians are failing to tackle the problem, backing the interests of big oil over the wellbeing of ordinary people, according to an eight-country poll. The poll, which surveyed more than 1,000 people in the UK, Canada, Germany, Italy, Brazil, France, Poland and the US , found that climate breakdown is viewed as the most important issue facing the world, ahead of migration, terrorism and the global economy, in seven out of the eight countries surveyed. Nick Lowles, from UK-based anti-racism group Hope not Hate, which commissioned the survey, said the findings showed that the public were “way ahead” of politicians in recognising the scale of the climate crisis. The poll found that few people believe their governments are doing enough – only 23% in the UK, 20% in Germany, 23% in Brazil and 26% in the US agree that ministers are taking sufficient action. (The Guardian)

United Nations Secretary-General Antonio Guterres says he is banking on new pledges from governments and businesses to abandon fossil fuels during a special climate summit in New York on Monday. On the stage next week will be countries including small island states most vulnerable to sea-level rise and European nations such as France and Germany, according to a draft schedule. Leading economies such as Japan and Australia will not be invited to speak, due their continued support for coal. Guterres has demanded that countries attending the summit stop building new coal power stations, reduce fossil fuel subsidies, and commit to net zero emissions by 2050 – demands that have not gone down well in all quarters. However, dozens of heads of state including the UK’s Boris Johnson and France’s Emmanuel Macron will deliver new climate pledges in a series of three-minute speeches, in what has been billed as a major show of global climate commitment. (Reuters, Financial Times*)

Businesses, campaign groups and scientists set out how to halve emissions by 2030

The Exponential Climate Action Roadmap, developed by a group of campaign organisations, businesses and scientists, this week released a report outlining 36 solutions to cut greenhouse gas emissions 50 per cent by 2030. The recommendations cover a raft of areas that are widely regarded as critical to any successful decarbonisation strategy, including accelerating renewable energy roll outs, deploying green transport infrastructure, reforming food production, and redesigning cities. Solar and wind power, now cheaper than fossil fuels in many regions, must be scaled up rapidly to replace coal-fired generation, and this alone could halve emissions from electricity generation by 2030, according to the report. However, the report also stressed that growing social movements in support of climate action, such as the school strikes, would be critical to ensuring new low carbon technologies and policies are deployed. Contributors to the report include the Stockholm Resilience Centre, WWF, and Swedish telecoms companies Ericsson and Telia. (BusinessGreen, Guardian)

This weekend, roads around London Bridge, Tower Bridge and much of the City of London will be closed in an effort to tackle the city’s air pollution crisis. Air pollution kills thousands of people every year and two million more live in areas where levels of air pollution are above the limit established by the World Health Organization. This is why the Mayor of London, Sadiq Khan, has decided to hold the capital’s biggest World Car-Free celebrations to date. “Air pollution has become a silent killer around the world,” says Khan, echoing the World Health Organization’s statement that air pollution represents a global public health emergency. On Sunday, the Mayor will close 20 km of roads in London’s city centre, with 18 boroughs hosting local celebrations, and hundreds of activities scheduled to take place across closed streets. World Car-Free Day is an international event celebrated every 22nd September and in which people are encouraged to use public or non-motorized transport to get around. (UN Environment)

Image Source: person holding there is no planet b poster by Bob Blob on Unsplash.